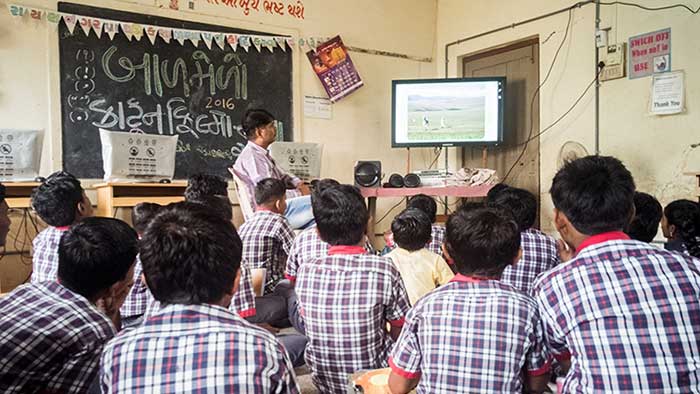 In a small school near Bhuj in Gujarat, a group of class five students sit attentively in class, their eyes glued to an LCD screen. The opened science books on their laps have come alive on the screen before them, as an animated character explains the nuances of the chapter in their native language, Gujarati. Efficient learning, experts say, happens when students enjoy the experience, and in hundreds of schools across Gujarat, digitised school textbooks are opening up children's minds like never before.

Learning Delight, the hand that is turning the wheel of change in 10,000 government schools, mostly in rural and semi-urban areas across the state, has been digitising the state curriculum since 2011, and has the approval of the Gujarat Council of Educational Research and Training (GCERT). The idea is simple: use technology to aid classroom teaching to make the learning process more engaging, more efficient - and definitely more fun.

So much so, that in a survey done in 350 schools where they have a presence, Parinita Gohil, co-founder of Learning Delight, said, "The dropout rate among children studying between Class 1 and Class 8 has come down by 6-7 per cent in the past five years."

It all started a decade back when two friends, Harshal Gohil and Vandan Kamdar, who were doing their MBA, realised that there was a huge gap in education between schools in different settings. Outdated teaching methods, lack of interest among students and teachers, and gender discrimination were some of the common problems. This led the two to use technology and design, an e-learning tool that would aid classroom teaching.

"Harshal and Vandan began with a survey in five schools. Here they found that although there was no dearth in infrastructure - the schools had computers - there was scepticism about using them," Parinita Gohil, who is married to Harshal Gohil, told IANS. The resistance mainly arose because "most teachers were not comfortable with the English language, were scared of using the computer, and apprehensive if the computers would replace their role".

Therefore, the offline computer software that they developed was designed in such a way that a teacher's presence was necessary in the class. The medium of instruction was Gujarati. "So be it any subject - science, math, social studies - the content was digitised in a way that through animation, riddles, puzzles, and stories textbook learning is made more interactive and fun," Parinita Gohil said. The experts who designed the digitised content also had teachers on board.

Next in the pipeline is a mobile phone app being developed with a similar software and a foray into Rajasthan, for which software has been developed in Hindi and in tandem with the Rajasthan state education board.