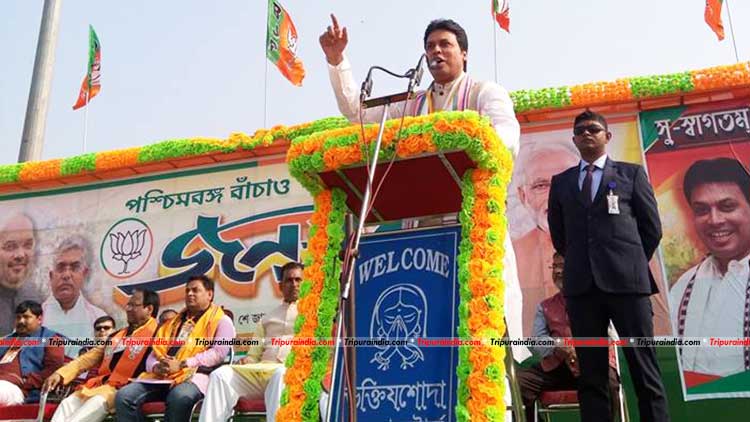 Tripura Chief Minister Biplab Deb today took on Mamata Governnent in West Bengal and alleged if recruitment scam across the state. The Chief Minister was addressing as a star campaigner for Bharatiya Janata Party Ganatantra Bachao rally at West Bengal's Arambagh. "If Mamta did has greater political experience than it must of recruitment scam and political murder experience that she had."

"Recruitment scam in Bengal goes rampant under the leadership of Mamata didi," adding to this Mr. Deb further alleged, "Democracy is also under threat in Bengal as political murder goes rampant."

Mr. Deb recounting the BJP govt.'s transparent policy in Tripura also alleged, "Every recruitment in West Bengal under the leadership of Mamata did turned to scam." Meantime the Tripura CM also took on Mamata in Bengali alleging, "Despite being a women leader Mamata didi have failed to secure women at her state, where mothers has to falk prey into political murder."

"But what Mamata didi did for the women of her state is nothing rather than instigating scam in recruitment process," Mr. Deb alleged.

Later appealing the people of Bengal today to vote for 'Majboot Sarkar' rather than 'Majboor Sarkar' the Tripura Chief Minister said, "Mamata Didi sarkar has failed to implement the central schemes for thr poor in her state of West Bengal."