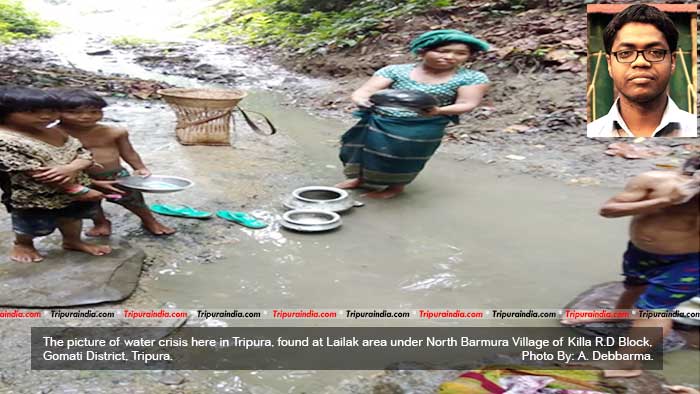 Jhum known as shifting cultivation is an important issue for climate change in the state Tripura and it’s negative impact on the environment and climate change which nowadays matter of global concern and many national and international and regional level organizations are doing their research work on the issue of climate change.

It has asked by the department of Forest, Government of Tripura in the Economic Review of Tripura that Jhum is the most serious problems leading to degradation of the forests. There are 266-species of medicinal plants, 379-tree species, 320-shrubs, 581-herbs, 165-climbers, 16-climbing shrubs, 35-ferns, 45-epiphytes and 4-parasites. Moreover, there are 50-species endemic to Tripura. Also, 2-primitive plants and 7-endangered plants are in the forests in the State also found in Tripura. The other negative impact of shifting cultivation is the damage of soil level.

The reviews of literatures are being found that a section of the indigenous population practices Jhum (slash and burn) method of cultivation. The tribals who practice shifting cultivation are known as “Jhumias”. Mostly the Reang tribe of Tripura practiced Jhum cropping at large. In Tripura over 10,039 hectares of land are under Jhum cultivation. In 1955, it was estimated that there were 25,000 Jhumias families in Tripura and the total land under Jhum cultivation was 16, 00,000 acres. According to report given by forest department of Tripura, a total of 27278 numbers of households which is 1.36 persons in lakh counted as Jhumias in the year 2007.

The continuous process of forest degradation for Jhum cultivation in the hilly parts of the North-Eastern state Tripura may result the less average rainfall. As the rain fall effected here in Tripura, there is another problem the scarcity of water. The destruction of forest for the purpose of Jhum cultivation may also result the scanty rainfall and uncertainty in the monsoon rainfall. The temperature is also increasing day by day here and effects on human life.

It is an example of water crisis here in Tripura that has found at Lailak area under North Barmura Village of Killa R.D Block, Gomati District, Tripura where more than 80 families have been suffering due to scarcity of water here. According to report given by Killa R.D Block office, a total of 42,616 populations and 16 numbers of Village Council are here under the block. The Killa area is mostly tribals populated area and they are closely dependent on agricultural activities for living their life where a good numbers of tribal people are doing Jhum as there is not any alternative option to earn income for the fulfillment of their basic needs of daily life. But such kind of agricultural activities like Jhum may leads to climate change in Tripura and the problem of water scarcity.

The officers of BDO of Killa R.D Block has informed it that the people who are living here at Lailak area suffer more because of water scarcity and the problem is serious and more in every year from February to June because there is not any option for water without rain water. The maximum people under Lailak area are depending on rain water for lining their life but the continuous process of forest degradation in order to Jhum cultivation in the hilly areas of the state Tripura and the area of Lailak under Killa Block may result the less average rainfall and also uncertainty in the monsoon rainfall.

It is very recent news published on United News of India (UNI) titled ‘Villagers of Twirupabari collect water from traditional water bodies in Tripura’ from Udaipur, Tripura on May 14, 2019 where it has reported that Twirupabari, a village of Tripura under Killa R.D Block of Gomati District which is tribal populated area and the villagers of this area are going to collect from their traditional water bodies called 'Chhara'(Small Water Body like very small river) every day for their daily life.

The news has presented a story that a woman named Laxmipiyari Jamatiya, a villager under Twirupabari area who had come to complete her bath here in the water of Twirupabari Chhara and said that the traditional water body is the only source of water in this area and the villagers of this area are maximum peasant and marginal farmer who are basically belong under BPL category and farming is the main source of income. The villagers of this area are doing MGNREGA work with the wage at amount of Rs: 170 per day and they get maximum 60 or 70 days work in the year.

The department of forest has polished a report in the Economic Review of Tripura that the soil erosion is beyond the permissible limit especially in the river catchments, draining out of the rain water as run-off water without recharging the ground water table which causes frequent floods as well as scarcity of water during the dry months, which need to be tackled in a phased manner for better environmental conservation. This kind of incident may the result of forest degradation for the sake of Jhum cultivation and impacts on climate change of Tripura.