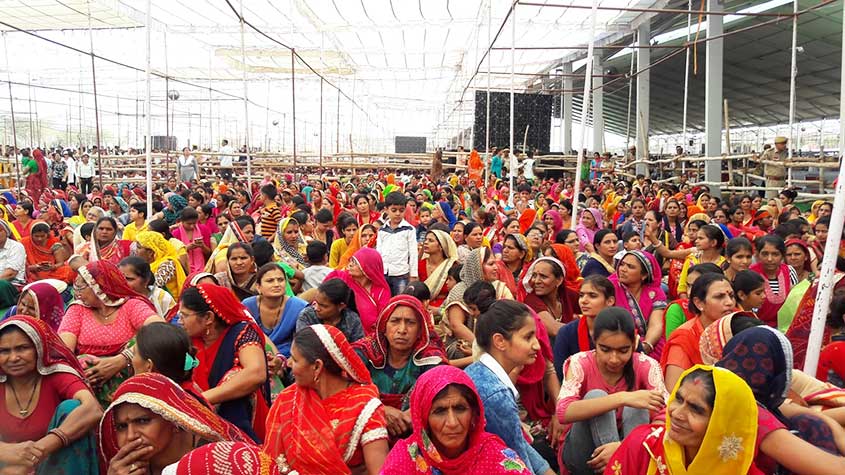 Sending her elder daughter Manushree to an English-medium school in Jhunjhunu (Rajasthan) was a distant dream for Sushila Thakan some eight years ago. Though she had her husband's moral support, she received little cooperation from her in-laws after she gave birth to a girl child.

"Everyone wanted a male child and female newborns were considered no less than a curse. No one wanted a girl child," the 32-year-old homemaker Sushila told IANS.

As per the 2011 census, Jhunjhunu district of Rajasthan had the worst child sex ratio in the state with 863 girls per 1,000 boys and got tagged because of its regressive traditional practices not only as a "socially backward" district in official statistics but also as a microcosm of the wrongs that ail Indian society.

The child-sex ratio in Rajasthan as per the 2011 census was one of the lowest in the country -- 888 females per 1,000 males as against the national ratio of 919 females per 1,000 males. Noted economist Amartya Sen had once said that India had some 40 million "missing women" and this skewed sex ratio has improving slowly, district by district.

Jhunjhunu, itself, is rapidly changing, claims Sushila. She said that although she later gave birth to a son, her daughter is the most pampered and loved one in the family now, an indicator of how society is transforming.

Today with a ratio of 951 girls per 1,000 boys, the district has become a role model for other districts in the country that are attempting to improve their child-sex ratio.

"This is because there has been awareness in the region about the importance of girls and impact of education. The state government came up with many schemes for girls and highlighted the need for equal sex ratio. Now the discrimination has almost ended here," Sushila emphasised.

However, the road to success was not a smooth one for the Rajasthan district. There were many hiccups which motivated and persevering district officials had to overcome in their mission.

"It's not something which improved overnight. It's a continuous process and a collective effort by everyone -- former district collectors, women welfare and health departments, NGOs and others," Dinesh Kumar Yadav, Jhunjhunu's District Collector, told IANS.

Yadav, who was posted in Jhunjhunu last year, said the biggest challenge for him and the administration was battling the mindset of the people -- misogynist thinking and male child-oriented approach of families.

"It was very difficult. We had to chase people, knock doors of every household, engage them with our schemes and make them understand through examples. Many girls from Jhunjhunu have joined the army, become government officers, or are working with multinational companies in big cities like Delhi. And we promoted such success stories, especially among families with girls," he added.

In order to encourage people to have a girl child, the administration started several schemes, some involving financial incentives, and even pushed for the celebration of rituals like 'kuan-poojan' (worship of a well), which were earlier performed only after birth of a son.

"We had to fight certain misconceptions... that only a male child will support them during old age. We showed them how girls have been supporting their families as well," he said.

Jhunjhunu also had a low literacy rate among women and to improve that the district administration started felicitating meritorious girls who outshine boys in exams.

"We started this felicitation programme called 'Jhunjhunu Gaurav Samman' where schools would put up pictures of meritorious girl students. We also took out rallies in honour of such meritorious girls," Yadav explained.

Jhunjhunu was also facing a high school-dropout rate among girls and to increase the enrolment of girls in schools, the administration first identified families where girls were either not enrolled or had dropped out.

"Then we contacted many women officials in administrative posts for help and made teams who would visit the families and motivate them to enrol their girls in school," he said.

"We understood that change would come only if we managed to engage with local people. We went on to select female brand ambassadors within the community who had already broken the ceiling to create a self-identity," Naresh Thakral, District Collector of Sikar, told IANS.

Women then started attending awareness classes organised by the Anganwadi centres and NGOs.

"Slowly and steadily, women started raising their voice against discrimination and difficulties faced by them in raising girls. They became vocal and aware of the need for a balanced sex ratio and the importance of having a girl child," Thakral said.

Although lowering the socio-cultural barriers was the first target, both districts were facing another major challenge -- female foeticide.

"There were many cases of female foeticide, which beside being illegal also posed threat to the pregnant women. Initially we connected with families with pregnant women and tried to know if they were seeking for sex determination tests. In such cases, the women activists would try to convince them against foeticide," Yadav said.

Both districts have succeeded in putting an end to female foeticide with implementation of strict laws and strong vigilance.

But just a check on hospitals was not enough. Even more important was educating women to stand against female foeticide. And to encourage female births, several schemes for mothers of girl children were started, not just by the state government but also by the Central government.

Prime Minister Narendra Modi's flagship "Beti Bachao Beti Padhao" (Save her Educate her) scheme which started off from Panipat in Haryana in 2015 also reached Jhunjhunu.

"Every year, we get around Rs 1 crore under this scheme , which helps our campaigns. Earlier we had to approach people for resources, but now the government has come around to help," Yadav said.

Modi had on International Women's Day this year launched the pan-India expansion of the scheme to all the 640 districts of the country and chose Jhunjhunu as the venue for the event. He honoured several officials, including one each from Jhunjhunu and Sikar, who had contributed to uplifting the status of women in their respective districts.