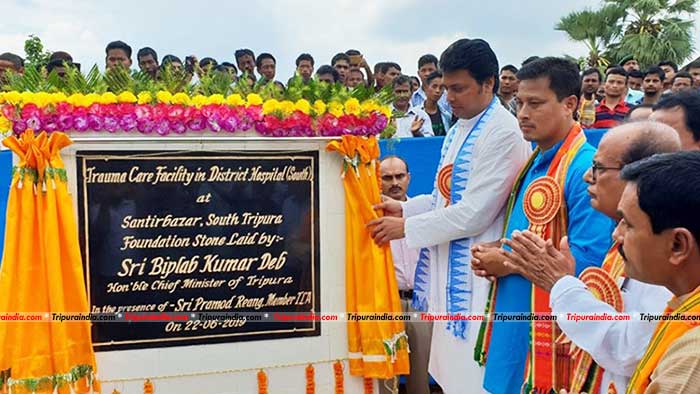 Chief Minister Biplab Kumar Deb who also holds the charge of Health department today claimed that observing Tripura’s growth in the revenue collection and other allied economic fields the Central Government has decided to allot 25 MBBS seats for the medical aspirants from economically weak section of the state.

“It is yet another historic step to uplift Tripura. The central Ministry has approved 25 more MBBS seats for the financial backward section of students with the existing seats available at AGMC hospital and Tripura Medical College remaining intact, a step ahead towards Model state” said the Chief Minister while inaugurating the foundation laying ceremony of Trauma Care Center at South Tripura District Hospital at Santirbazar.

“The state government is only 15 month old, but it has successfully paved a new direction to achieve self-reliance for the state. In last 15 months, the tax revenue collection of the state touched a new height with a record increase from 9.8% to 26% which shows how the people of the state is striving towards setting new paradigm of growth” he added.

He also said that earlier we the people of Tripura were told to follow the West Bengal. And now, he claimed, Tripura’s development is wielding influence on the Bengal. Very soon the West Bengal will also enthrone the BJP as we have observed in the Lok Sabha elections following footsteps of Tripura which has become possible due to the Prime Minister’s Narendra Modi’s good wishes for the land of Mata Tripura Sundari, he observed.

Regarding the Trauma Care Center, he said, the PWD department which has been entrusted to construct the building are directed to complete all the necessary construction within next 18 months. Reports indicted, incessant road mishaps claim many innocent lives in National Highway 8. And, setting up emergency facilities here is a need of the hour, he told the gathering.