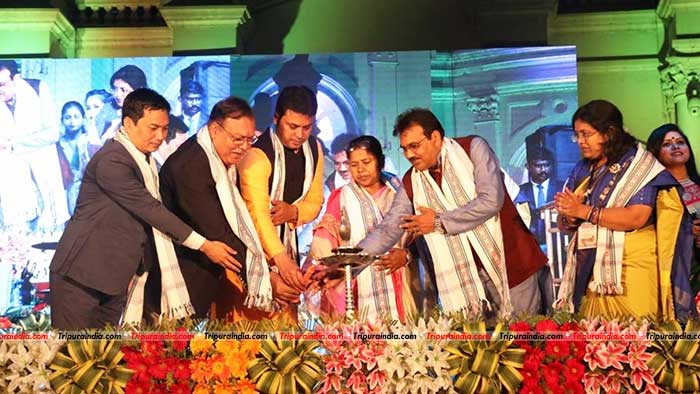 The Chief Minister pointed out that a good number of patients from Bangladesh visit various parts of India every year and spends funds for availing treatment.

“They will definitely come to Tripura if they get world-class healthcare here. Tripura is the nearest destination centre, the travelling cost will be less and most importantly Bengali-speaking people of Bangladesh will not face any linguistic problem,” he viewed.

Speaking on Eco Tourism, the Chief Minster said the state government took a decision so that the space of tea gardens up to 20 acres can be used for developing Eco Tourism.

“There will be log huts and marriage destination centre. Tripura will play a vital role as wedding destination in the North East after a few years and it will generate income,” he said adding that the state government would set up auction centre in Tripura for exporting tea with branding.

“Tourism sector contributes a lot in strengthening economy and the state government is working to improve this sector. As part of wild tourism, the state government has already set up Bison Point, Hornbill Point and Vulture Point to attract more tourists,” the Chief Minister said.

Addressing the ceremony, the Chief Minster also said that a cultural hub would be set up in the state at Rs. 200 crore under Fifteenth Finance Commission.

In his speech, the Chief Minister said, “once Tripura is linked with Chittagong Port in Bangladesh through the Feni Bridge, the entire Northeast along with Bangladesh will receive the benefits.” He also spoke about the Special Economic Zone being set up at Sabroom in South Tripura.

The relation between India and Bangladesh is becoming strong following the sincere efforts of Prime Minister Narendra Modi and his Bangladesh counterpart Sheikh Hasina, he said.

“There was gap in the relation of the both the countries for a period. But, the bonding-- be it bilateral trade or cultural – is becoming strong following the initiatives of our Prime Minister Narendra Modi and Bangladesh Prime Minister Sheikh Hasina,” the Chief Minister added.

Meanwhile, the first-ever colourful Bharat-Bangla Paryatan Utsav registered massive gathering in the city this evening. The artists from Tripura, Bangladesh and Kolkata enthralled the audience with their electrifying performances.

Tourism minister Pranajit Singha Roy, Bangladesh Assistant High Commissioner to Tripura Kiriti Chakma, MP Pratima Bhwomik, MP from Bangladesh Md. Abdus Saheed and many other delegates of Bangladesh were also present in the programme. Some of the tour operators and tourist guides were awarded in the programme.