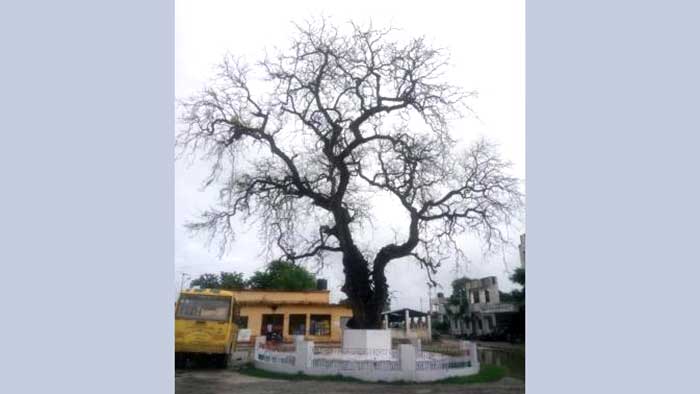 Champaran -- the workplace of Mahatma Gandhi, has many memories of the Mahatma. A 'Neem tree' in East Champaran district is one of them.

The tree situated in Turkaulia block office -- 10 km away from Motihari -- at the district headquarters, is part of history, it bears witness when great movements unfolded.

However, its condition is not well at all. The district administration is now taking some steps to save the witness to the Champaran Satyagrah.

A Gandhian thinker from East Champaran Rai Sunder Dev Sharma told IANS, "The Neem tree has witnessed the atrocities which the Britishers rained on farmers. They used to tie farmers who refused to pay 'lagan' for harvesting indigo with this tree and beat them up.

Another Gandhian thinker and a journalist Kumar Krishnan told IANS: "This is not just any tree, it is a sort of heritage. Gandhi used to sit under this tree and meet people. He mobilised farmers and villagers for the 'Satyagrah'."

He said Gandhi came on August 4, 1917 during Champaran Satyagrah and looked into the atrocities on farmers cultivating indigo and registered statements of more than thousands of villagers.

District Collector Raman Kumar has now ordered the Forest Department to find out the reason behind the drying up of the tree and take appropriate action to curb it.

A Forest Department officer said: "The department has looked into the reasons and filed its report to the District Collector of East Champaran suggesting remedies to revive the tree."

The Forest Department in its report has said that due to the platform around the tree, it is not getting sufficient nutrients due to which the leaves of the trees are shedding and the tree is not doing well, Forest division officer (FDO) East Champaran Prabhakar Jha said.

If the platform around it will be removed the tree would revive. The trunk of the tree is still green. The soil around the tree needs treatment, it has suggested.