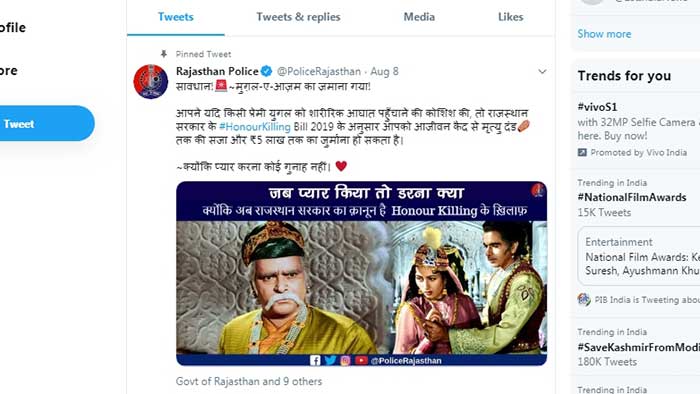 After Rajasthan passed a bill prohibiting honour killing in the state, the Rajasthan Police has come out in support of people in love.

"Falling in love is not a crime," tweeted Rajasthan Police on Thursday, attaching a poster of the Bollywood classic "Mughal-e-Azam" highlighting a line from its songs "Jab pyar kiya to darna kya".

The tweet further said: "Beware, the times of 'Mughal-e-Azam' are over. If you try to physically injure any couple, then according to the new Rajathan honour killing law, you can get a life term or a death sentence with a fine of Rs 5 lakh. Because falling in love is not a crime."

The Rajasthan Prohibition of Interference with the Freedom of Matrimonial Alliances in the Name of Honour and Tradition Bill, 2019 was passed by the Assembly on Monday making provision for punishment of death penalty or life imprisonment till natural death for killing a couple or either of them in the name of honour.