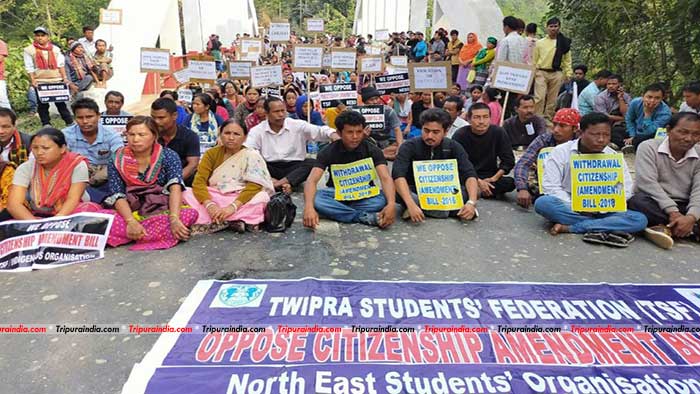 As the North-East erupts in protest against Citizenship Amendment Bill passed in the lower house of the parliament on Monday; this has hit the normal life in Tripura. The indefinite strike called by Joint Movement against Citizenship Amendment Bill (JMACAB), a platform of regional political parties, Civil Society Organizations and Students’ Organizations is intensified on Tuesday as roads, business establishments remained shut down since morning. The rail service is also hit badly as passengers are stuck in the rail stations

Several organizations in Assam, including All Assam Student Union (AASU), opposed the Citizenship Amendment Bill alleging that it would impact the interest of the people by granting citizenship to people from foreign nations and this would create an identity crisis for the tribals in the state.

The tribal leaders in Tripura, however, are worried and felt that the introduction of this bill shall endanger their identity and livelihood. “Now that the bill is passed in the lower house of the parliament, we will move to the Supreme Court of India,” said Tripura Tribal Welfare Minister Mevar Kumar Jamatia.

The indefinite ‘bandh’ has severely disrupted normal life and business mainly in areas under the Tripura Tribal Areas Autonomous District Council (TTAADC). Vehicular movement on the Assam-Agartala national highway and train services were also affected. Earlier on Monday the IPFT an ally to the BJP government in Tripura enforced a 12-hour general strike in the TTAADC protesting against the CAB.

Meantime, the 11-hour Northeast bandh called by an umbrella body of students' organisations of the region to protest against the Citizenship (Amendment) Bill began at 5 am on Tuesday.