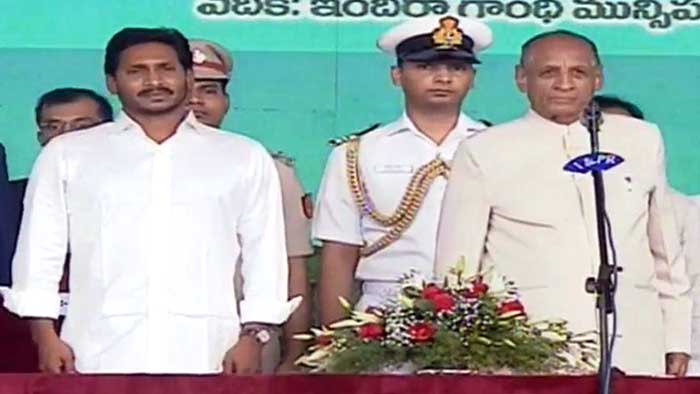 Y.S. Jagan Mohan Reddy on Thursday took oath as the Chief Minister of Andhra Pradesh as thousands of his supporters lustily cheered him.

Jagan Reddy, who led the YSR Congress Party (YSRCP) to a landslide victory in Assembly elections, took oath in Telugu at 12.23 p.m., the auspicious time chose by his advisors.

Jagan, as the young leader is popularly known, arrived at the venue, standing in an open top vehicle, greeting the crowd with folded hands and a big smile.

As he began taking the oath, there were loud cheers from thousands of YSRCP leaders and workers who had gathered from across the state.

He paused briefly after uttering his initials Y.S., apparently getting emotional on remembering his late father, who was popular as YSR.

Christian, Muslim and Hindu priests blessed Jagan on the occasion and prayed for his success and the well-being and prosperity of the state.

Vijayalakshmi turned emotional and broke down as Jagan took oath and delivered his maiden speech as the Chief Minister. Jagan hugged her and wiped her tears.

Son of Congress leader and former Chief Minister Y.S. Rajasekhara Reddy and hailing from Kadapa district of Rayalaseema region, Jagan was re-elected to Assembly from Pulivendula. He was twice elected to Lok Sabha from Kadapa.

Jagan had quit the Congress and floated YSRCP in 2011, one-and-a-half year after his father died in a helicopter crash.

Like YSR who became the Chief Minister of undivided Andhra Pradesh for the first term in 2004, Jagan took the oath at a public ceremony and also signed the first file.

While YSR had signed the first orders to waive farmers' loans and supply free electricity to them, Jagan signed the orders to enhance social security pension.

Addressing the gathering briefly, Stalin expressed his best wishes and hoped that Jagan will carry forward the political legacy of YSR.

Chandrashekhar Rao, in his speech, congratulated Jagan and the people of Andhra Pradesh for the landslide victory of YSRCP. He said the two Telugu states would work together for their mutual well-being.

He called for cordial relations between the two states to address all issues and ensure utilization of Godavari and Krishna river waters.