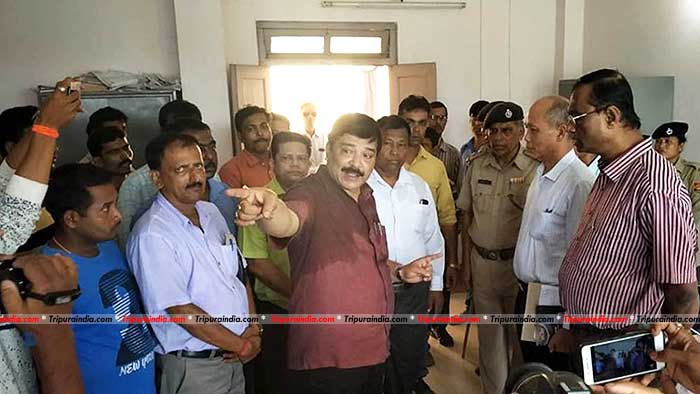 Acting on a tip off the state health and family welfare minister Sudip Roy Barman today busted abortion racket in Birchandra Manu in southern part of the state. Government doctor identified as Ajoy Biswas is caught red handed while initiating the abortion of a local women in the government hospital. However, FIR was lodged immediately against the accused doctor. The health minister was accompanied by the health secretary Samarjit Bhowmik and other officials of the state health department.

"We had an information on this and accordingly we along with the health minister himself conducted this raid in the hospital and caught hold this accused doctor inside the operation theatre while he was operating a local women to initiate abortion," said an official who also accompanied this raid.

Meantime, the health minister Sudip Roy Barman said, "After getting confirmed with this incident I rushed to the hospital and caught this accused doctor red handed. After being asked the concerned nurses admitted that as many as three to four abortions are initiated in this hospital daily." Mr. Barman continued saying, "Legal action shall be taken against the accused doctor. The Chief Minister is also being apprised of this incident immediately."

The health minister and other officials also inspected the nearby jungle areas of this hospital getting an alarm of burying or killing the aborted babies.

The accused doctor Ajay Biswas is however found to have been practising this abortion cases for the past many days or more.