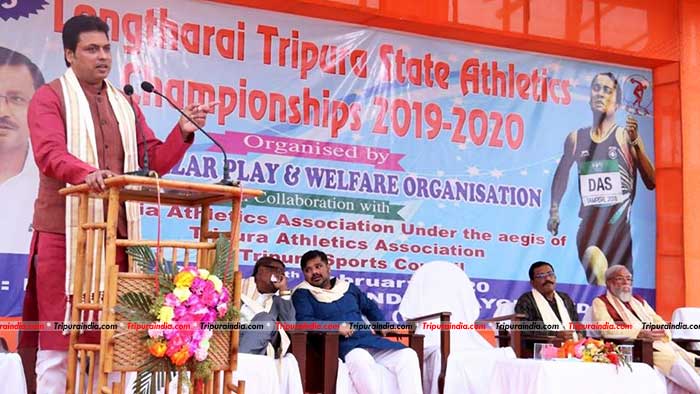 The state government would provide arrear and other allowances to the employees after receiving funds from Fifteenth Finance Commission, said Chief Minister Biplab Kumar Deb.

“After receiving funds from Fifteenth Finance Commission, the state government will fulfill all the promises made in the Vision Document-- be it arrear and other allowance to employees or increase in social allowance up to Rs. 2000,” the Chief Minister said.

The Chief Minister said the previous government only used to deliver words for 25 years but the new government is implementing various projects for the welfare of all sections of people.

Addressing the gathering, he said, “Ranir Bazar will soon have a sub-divisional hospital. Besides, the state government already allotted land for setting up of a College in this area.”

The Chief Minister said his government is working in all sectors including Sports. After the formation of the new government, 1100 clubs were provided sports kits of Rs. 8500 each so that the young generation remains involved in sports and build Nesha mukt Tripura, he added.

He also highlighted the achievements of Tripura players in various contests and acknowledged that Tripura team had become champion in the recently-concluded Under-17 Boys Football Tournament (National School Games).

“Athletics Tracks have been constructed in Panisagar and Badharghat. Besides, Udaipur will also have Athletics Track. The Tennis Court which has been set up in Dasharath Deb State Sports Complex is the most beautiful tennis court in the North East,” he added.

Referring to the steps taken by the new government in the last 23 months, the Chief Minister said the education sector is making equal progress in both urban and rural areas and the Mission 30-30 is playing an important role in this regard.

Before concluding his speech, the Chief Minister said his government is working to strengthen the entire system besides generating employment.