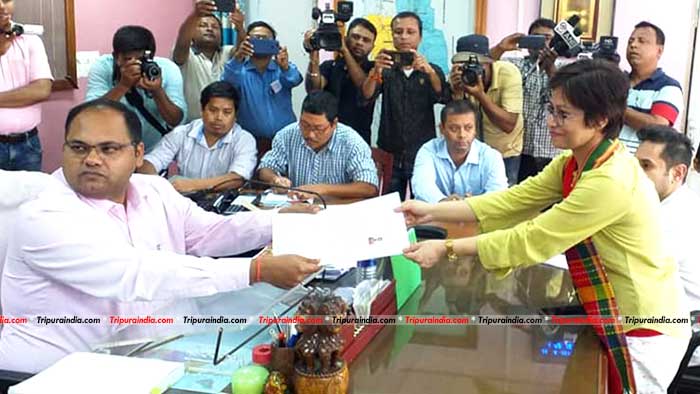 Tripura Pradesh Congress nominated candidate for the East Tripura parliamentary constituency Pragya Debbarma today filed her nomination at Ambassa, Dhalai. Pragya Debbarma, who is also the elder sister of PCC president Pradyot Kishore Debbarman and granddaughter of Maharaja Bir Bikram Kishore Debbarman, is one the most fresh faces among the contesting candidates of these Lok Sabha polls.

The academician turn politician after filing her nomination papers said, the entire political spectrum of the country requires more fresh faces who will be able to lead the voice people to the higher most authority of the country. She also hoped for her victory saying, the people’s participation in the rally here augmented the level of confidence and I am sure the people will cast their votes in favour of the Congress party.

A grand public meeting in this regard was also organized at Jawahar Nagar area under Ambassa. Since the morning huge number of Congress-INPT supporters along with activists of MACAB joined the meeting and later participated in the nomination submission rally.

Speaking on the occasion, TPCC president Pradyor Kishore said, people have understood the nature of BJP. Before elections “Biplab Babu” promised of seventh pay commission, employment to every household and many more but unfortunately in this one year they have done nothing. People of the state have understood all these promises were made just woo the electorates nothing else, he added. He also urged the people to vote for Congress even remaining in the BJP so that no political intimidation could harm the voters.