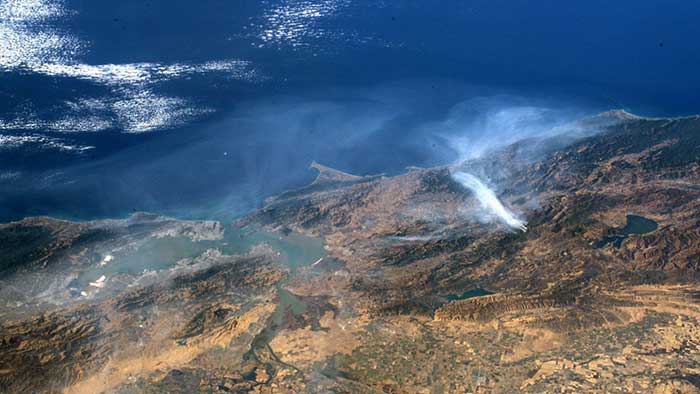 Astronaut Andrew Morgan took to Twitter on Wednesday as he shared the images of the California wildfires burning north of the Bay area from the International Space Station.

Morgan tweeted: "From @Space_Station I was able to catch these pictures of the California wildfires burning north of the Bay Area. Thinking of the people who have lost their homes and the brave first responders on the front lines protecting them."

On Monday the Getty Fire in West Los Angeles forced 10,000 residents, including multiple celebrities living near Hollywood, to evacuate, and the Kincade Fire, which broke out northeast of Geyserville in Sonoma County on the night of October 23, continued to rage across Northern California, Xinhua news agency reported.

The authorities reported that the Kincade fire has consumed 30,519 hectares and destroyed 123 structures, including 53 houses, Efe news reported.

Almost 156,000 people were unable to return to their homes in Sonoma County.

Residents of entire cities like Geyserville, Windsor and Healdsburg filled dozens of shelters installed from Petaluma to the city of San Francisco.