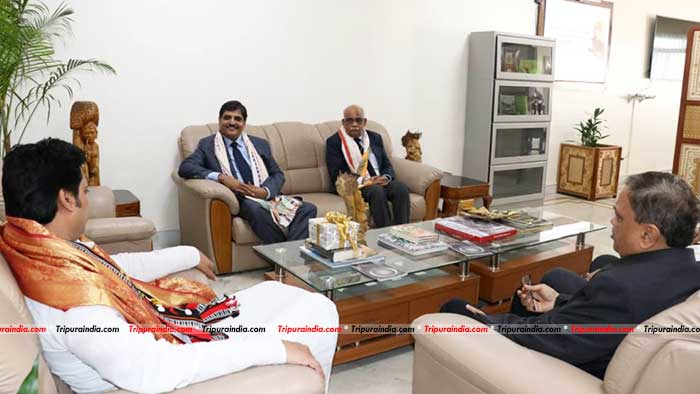 In a major boost to the state's health care facilities, the renowned Apollo hospital group on Monday proposed to set up their super-specialty hospital in Tripura's capital town of Agartala.

The chairman of the Apollo group of hospitals V. Satyanarayana Reddy accompanied by his officials today met the chief minister Biplab Kumar Deb at his office chamber at the secretariat office and had a constructive discussion on setting up of the hospital so as to render quality health care to the people of this state who have to fly abroad for better treatment.

"As Apollo has been called we have come here to table a proposal with the Tripura government for setting up of super-speciality hospital which shall include the major departments like - Cardiology, Neurology and Nephrology," adding to this Mr. Reddy said, "We are intended to open the hospital here in Agartala so as to render quality health care to the patients of Tripura and neighbouring country like Bangladesh and other NE states. We had a thorough discussion with the Chief Minister in this regard."

He said, "There is a big scope for North East while we open our hospital here. North East needs the best health care opportunity which is very important for the people of Tripura." He said, "Government is ready to provide us with a newly constructed building, where we can install our super-specialty departments."

He said, "The Public-Private Partnership (PPP) model of the Government of India is working well enough now to bring up better health care facilities which also pave a way out of making India a better medical hub."

However, the BJP led coalition government has been focusing on setting up of super-specialty hospital in the new multi-storied building constructed in the premise of IGM hospital on PPP model.