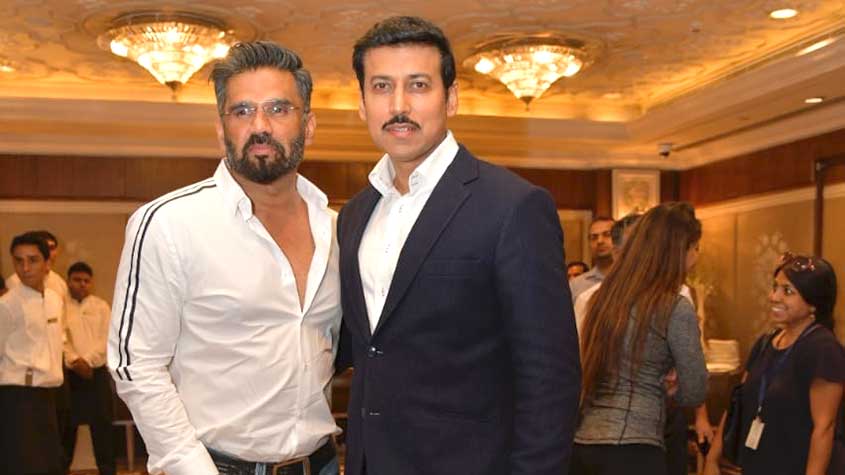 Action star Suniel Shetty, 56, doesn't see age getting in his way of adding more action-packed movies to his filmography. He says age is just a number and that he is as fit and strong as he used to be years ago.

In the 1990s, Suniel earned the label of action hero due to his work in films like "Gopi Kishan", "Shastra", "Sapoot", "Rakshak" and "Border". Last year, he featured in another action movie, "A Gentleman", but the audience didn't get to see him engaged in a fist fight or doing death-defying stunts.

Is he willing to do more action movies?

"Of course. Age is just a number and I am as fit and strong enough to do action (films) as I was earlier. So, there's no running away from it. That's what my audience expects... action and comedy. That's what I am going to deliver," Suniel told IANS over phone from Mumbai.

He also expressed his disappointment over "A Gentleman", in which he played an antagonist.

"There was a lot of difference between what was narrated to me and what was done. I was very disappointed... the way they edited. But then I dug my own grave, so I can't complain. Now, I have got some amazing films happening," he said.

And most of them are sequels.

"Sequels are working big time. And I am one person with four or five sequels. So, I am excited. I have sequels to 'Bhagam Bhag', 'Awara Paagal Deewana', 'Hera Pheri' and 'One Two Three'... a lot of sequels... should be good," said Suniel.

"The second part has always done more business than the first one. So it's okay. It also depends on the subject," he added.

What is he most excited about?

"I guess 'Hera Pheri 3' because people always ask about it...every single day. Also, the characters are legendary," he said.

"I think the shooting will only start by the end of the year... probably in November," added the actor, who played a struggling pauper in "Hera Pheri".

He owes all his success, time in the industry and more to fitness.

"I was always a martial artist and into fitness. I got into cinema thanks to my physique... not that I was a trained actor. I think I owe everything, my life, to fitness.

"Whether in college or school, it was always about fitness and wellness for me. That has only helped me today. Even at this age, I am fit and lean. I can play the sport that I want to and train the way I want to," he said.

His dedication to his health remains the same but the fitness regime has changed a little bit.

"My diet has become lighter. I make sure I do yoga six days a week and train four days a week, light weights. I am also working on my muscles. They start deteriorating when you start ageing," said Suniel.

He urged others also to focus on wellness.

"People need to eat right, begin the day with a walk, do cycling or swimming... just get involved in some physical activity. I strongly believe that wellness is far cheaper than illness. Instead of falling ill, if you invest in wellness, it works like magic," he said.

"It is unbelievable. It is something that is much needed. Being an athlete himself, he can understand better than anybody else. I think it is an unbelievable initiative because we have also seen the response that has come from India.

"I would say wellness because that's what India needs to realise -- that we need to stay well. After Swachh Bharat, it is automatically Swasth Bharat," said the actor.