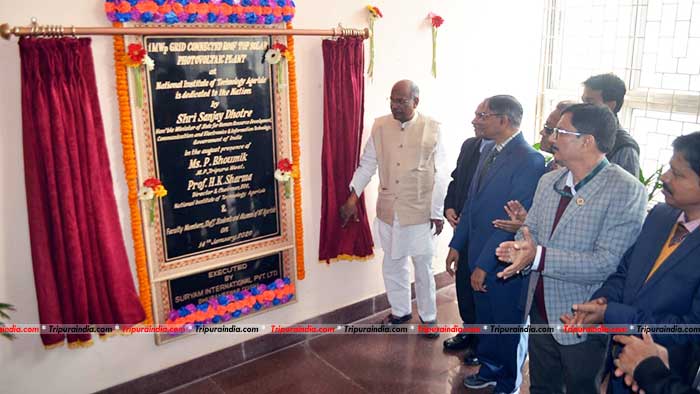 In a short media interaction he backed CAA and said that the Citizenship Amendment Act (CAA) had been introduced to offer citizenship to people rather disenfranchising people and alleged that a section of people were intentionally creating a disturbing atmosphere.

“Fear of unknown is being spread everywhere. This fear is ultimately harming the country and its people. Since the Bill has been placed, the ruling party made its point clear that it’s a bill to offer citizenship and existing citizens of the country have nothing to fear with the bill. In Rajya Sabha and Lok Sabha many parties who are not in NDA extended support to the bill. And, the opposition have nothing concrete to argue with” Dhotre told media today after inaugurating a solar plant here in Agartala NIT complex.

Reacting on the JNU violence, he said, whenever the situation start taking some good shape, disturbing elements get active and result in some problems which further take a turn of blame game and mud-slinging.

“Whenever things started improving, some political activities take place and situation turn bitter once again triggering a row of blames, allegations and counter-allegations” he told media.

When asked about the police’s role and allegations being rose against VC, he said, “Criticizing someone is very easy. Why the VC did not call police, what has actually happened and what are the situations prevailing over there then have to be taken in consideration. Nobody can take a right decision every time”.

Notably, all the NIT directors of North Eastern region will attend a meeting which will be presided over by the minister this evening.