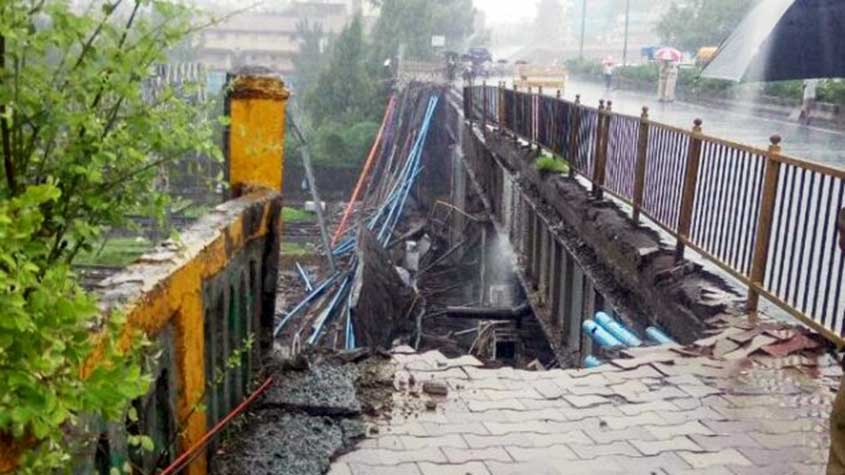 A section of a foot overbridge here caved in over the Western Railway (WR) tracks during Tuesday morning's peak hours following incessant rain, leaving five persons injured, and creating a scare among the commuters, an official said.

The injured, who include one woman, have been admitted to the Brihanmumbai Municipal Corporation's R.N. Cooper Hospital in Vile Parle, a BMC official said. One of them is critical.

Railway Minister Piyush Goyal has ordered an inquiry into the incident.

Heavy overnight rains and waterlogging in many areas is suspected to be the cause of the crash of the structure, known as the Gokhale Bridge, on S.V. Road, which connects Andheri East and Andheri West.

There were no immediate confirmation whether the injured were commuters or pedestrians. Rescue operations continued to save those believed to be trapped under the debris.

Work was also on to remove the debris from the WR tracks which blocked services in both directions, hitting hard the Mumbai commuters bound for their offices.

According to WR spokesperson C.N.K. David, the portion of the bridge crashed at around 7.30 a.m. on the the southern-end of the Andheri platform numbers 7-8.

The falling bridge damaged a portion of the platform roof, blocked the railway lines and damaged the high-tension electric wires and overhead power equipments, he added.

"The restoration work is in full swing and we hope to resume normal train services in the next few hours," David said.

The WR said trains were being operated between Goregaon-Virar on the northern side and Bandra-Churchgate in the southern direction, besides Harbour Line from Bandra-CST, and several long-distance trains were rescheduled.

The Commissioner of Railway Safety will investigate the incident which has triggered a blame-game between the WR and the BMC.

While the WR said the bridge belongs to the BMC, the latter said the crash took place on the railway portion which was the WR's responsibility for repairs and maintenance.

With several lakhs of commuters stranded all over the network, the civic transport body BEST deployed 40 additional bus services between Goregaon-Bandra to clear the rush.

The cascading effect was also seen on the Western Express Highway, the main S.V. Road, Link Road and other arterial roads with traffic jams all over.

As a precautionary measure, Mumbai police have stopped all traffic above and below the bridge till the green signal from the railway authorities.

Mumbai's Dabbawalas have suspended all their tiffin box deliveries on Tuesday on the Western Railway routes but would continue on other routes.