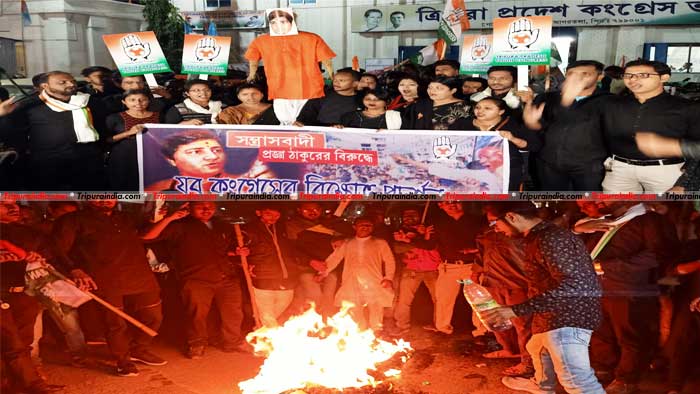 Bhopal MP Sadhvi Pragya Singh Thakur's statement in the Lok Sabha has stirred a political storm across the country. Along with rest of the nation, the Tripura Pradesh Youth Congress on Friday showed protest over Pragya Thakur's remark referring to Nathuram Godse as 'deshbhakt' in the Parliament recently.

A large number of youth congress activists took on the capital street to show their protest on Friday evening and burned the effigy of Pragya Thakur. The youth congress demanded the Prime Minister Narendra Modi to immediately remove her from her MP post and sack her from the membership of BJP party.

The Youth Congress President Pujan Biswas who lead the protest today said that Pragya Thakur who was indulged with terrorist activity earlier has repeatedly embarrassed the insulted the Father of Nation Mahatma Gandhi.

He however demanded that Prime Minister Narendra Modi and Bharatiya Janata Party (BJP) national president Amit Shah should take stern action against Pragya Singh Thakur and expel her from the party.