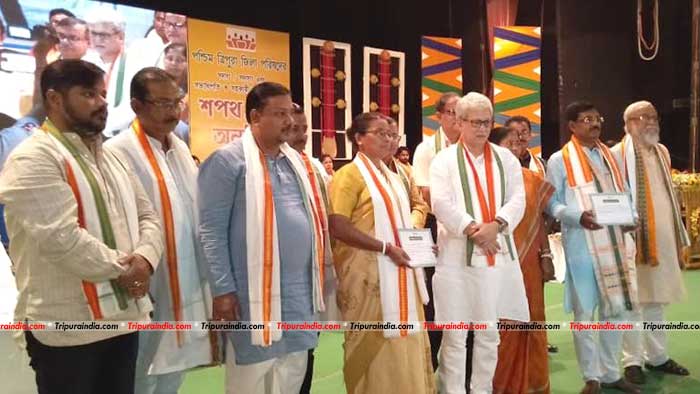 The government should reach each and every person in need rather people in distress approach the government. Only then the goal of good governance can be achieved. And to do so, elected members of Panchayat and Zila Parishad have to pay a pivotal role, Deputy Chief Minister Jishnu Dev Varma who also holds the Panchayat portfolio said today.

Speaking at the swearing in ceremony of newly elected Zila Parishad members of West Tripura district, the Minister also said, the vision of the state government as well as Prime Minister Narendra Modi is to empower every village. At least we have to set up one model village in every district.

Speaking on the budget, he said, 75% of the total Union budget was village-oriented. Nationally, the central government is trying to empower villages through decentralization of power and “Gram Swaraj”. The newly elected Panchayat and Zila Parishad members are like the connecting rope between the government and the people of the state, he added.

The new elected members, he added, have to shoulder the responsibility to increase the reach government schemes to the last person of the queue. It is for the first time the BJP party had made its roots strengthen even to village level. The vision of “Ek Tripura Srestha Tripura” lies on this reach. Our government should not run from the civil secretariat, it should act right from the remote village members of the party, he said.

He also informed the gathering that new members would be imparted training as to how the modernization works were being carried out in the Panchayat level so that we could accelerate the flow of development.

However, altogether 17 members took oath on the occasion in presence of MP Pratima Bhowmik and Education Minister Ratan Lal Nath and other party legislators. Antara Sarkar Deb was elected as the new Zila Sabhadhipati whereas Hari Dulal Acharjee was elected as the new Saha Sabhadhipati of West Tripura district. Director of Panchayat department Rajendra Noatia administered oath of the newly elected members.