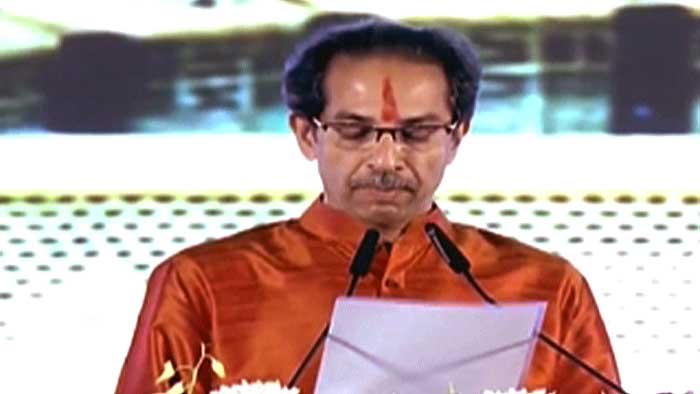 Shiv Sena President Uddhav B. Thackeray was sworn in as the Chief Minister of Maharashtra at a grand function held at the Shivaji Park here on Thursday.

Governor B.S. Koshyari administered the oath of office and secrecy to Uddhav Thackery at 6.40 p.m. with the Sena chief sporting a striking saffron coloured kurta-pyjama, his party's colour.

In an unusual gesture of humility, soon after completing the formalities, Thackeray stepped to the front of the stage and knelt down, touching the floor with his hands and head to express his gratitude to the people of Maharashtra for the honour bestowed on him.

Besides, two legislators each from the Shiv Sena, Nationalist Congress Party and Congress, the key constituents of the Maha Vikas Aghadi (MVA), took oath as ministers.

Among the prominent dignitaries present on the occasion were more than 500 farmers and farm widows from all over Maharashtra, Uddhav Thackery's cousin and Maharashtra Navnirman Sena President Raj Thackeray, industrialist Mukesh Ambani, his wife Nita Ambani and their family members.