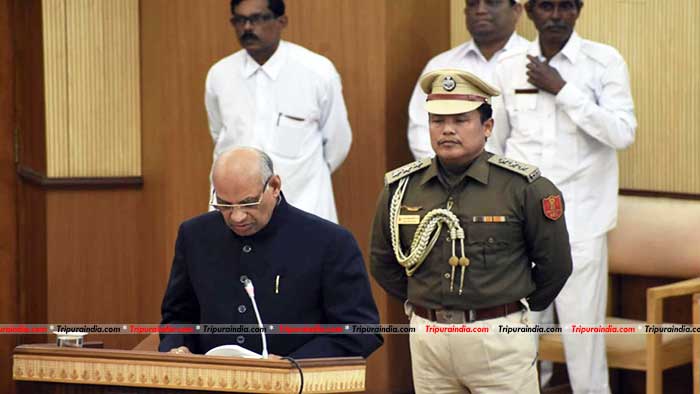 The Tripura government has taken up an ambitious action plan to make the state free of drug-addiction while the government's proactive steps have reduced crimes against women, Tripura Governor Ramesh Bais said here on Friday.

In his customary speech on the opening day of the first session of the state assembly in the new year, the Governor said that in the past 20 months, 722 cases have been registered under the Narcotic Drugs and Psychotropic Substances (NDPS) Act and 1,241 people were arrested for trading in and smuggling various types of drugs.

He said that around 78,853 kgs of dry ganja (cannabis), 7375 grams of heroin and various others drugs have been seized during this period.

Highlighting the Bharatiya Janata Party-led government's feat, Bais said that 1,891 cases of crime against women were registered in the past 20 months.

Referring to the data of the National Crime Record Bureau (NCRB), the Governor said that the crime rate against women has come down to 43.7 last year (2019) from 51.2 in 2017 against the national average of 58.8 in 2018 in per lakh of women populations.

According to the Governor, in the non-IPC cases, the conviction rate has increased from 28.15 per cent in 2017 to 34.9 per cent last year.

Claiming that the flow of tourists has increased in Tripura, the Governor said that Tripura has started exporting the "Queen variety" of delicious pineapple to the global market after it was declared the "state fruit" by the President.

Highlighting the various socio-economic measures taken by the present BJP-led government, the Governor said that the state government has submitted projects worth Rs 8,802 cr to the Union Home Ministry for social, economic, cultural, linguistic and other development of the indigenous tribals.

The Governor said that to boost the industry, the Union Commerce and Industry Ministry has notified the setting up of the first ever Special Economic Zone (SEZ) in southern Tripura with an estimated investment of Rs 1550 crore."Both service and manufacturing sectors would be set up in the proposed SEZ," he pointed out.