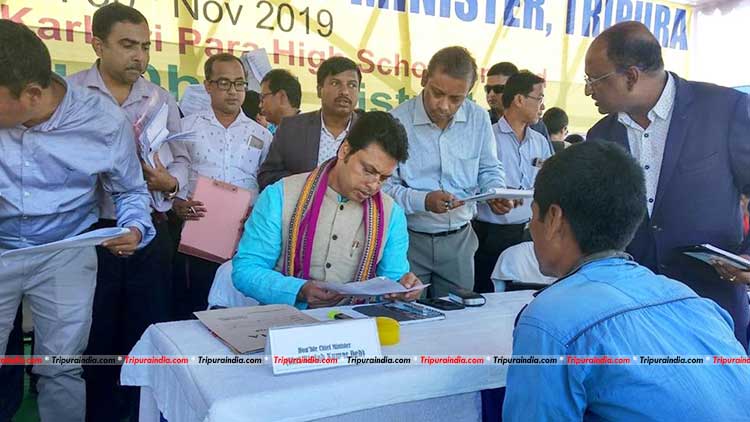 Chief Minister Biplab Kumar Deb today ruled out the opposition’s allegation of food and job crisis in the hilly areas of the state and said, “The centre has extended and sanctioned 4 crore mandays which was earlier 3 crore.”

He said this while he held Jantar Darbar at Chawmanu’s Dhanyaram karbari Para High School in Dhalai district of the state today. People mainly from the tribal community has participated in large numbers & discussed various issues.

“The 25 years rule of the previous Left front government who are now alleging food and job crisis have deprived the people of this state mainly the poor in the name of irregular fund flow from the centre,” adding to this Mr. Deb today said, “Ever since the BJP lead coalition government is formed in Tripura, we have not staged any protest and dharna seeking fund from the centre as Tripura is developing fast with enough aid from the centre.”

Meantime, the Chief Minister today said, “People mainly from the tribal community has come to me in Jantar Dabar and apprised me of various issues like water crisis, market shed, and proper roads in some parts of the village. I have instantly directed the concerned officials to take necessary initiatives and resolve the issues at the earliest.”