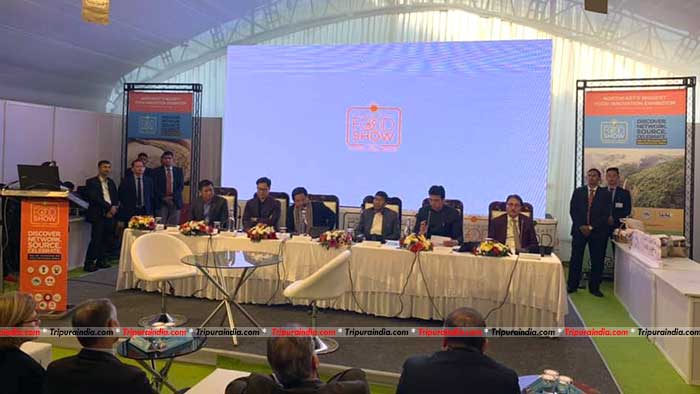 Tripura Chief Minister Biplab Kumar Deb who has been constantly stressing on boosting the food processing industries in Tripura and other North-East states now finds the idea of honey bee cultivation from rubber flowers. “Tripura government is working on cultivating honey bee from flowers of the rubber plant which we have at large number,” adding to this Mr. Deb said, “This shall also generate another employment opportunity and boost farmers’ income who are to simply collect the honey and export it.”

The Chief Minister was addressing the North East Food Show held at Meghalaya on Friday which aimed to promote food processing in North East.

Mr. Deb said, “Bee honey collected from the rubber flower is considered to be the most expensive honey across the globe.” Tripura is the second largest rubber producing state in India after Kerala, as per area under cultivation and quantity of produce.

“This shall generate around Rs. 50000 per month income for the farmers who are to be inducted in this honey bee cultivation,” adding to this Mr. Deb today laid emphasis on boosting the food processing in the North East. “I have already taken up the matter with the North East Council meeting where I wanted the 8 NE states jointly to work on food processing.”

The Chief Minister however thanked the Meghalaya Chief Minister Conrad Sangma for organising this Northeast Food Show and said, “I have got invitation from France to participate in their food show, but now that such food shows are getting organised in Northeastern states of India, I am proud to be here in Meghalaya.”

The Chief Minister in his brief speech in the food show programme today said, “The accelerated bond between India and Bangladesh Prime Minister is all set to develop the North East region of the country.” He said, “Once the bridge over the river Feni is opened followed by the access of Chittagong sea port and others, Tripura will be capable of catering the need of other states in NE region.”