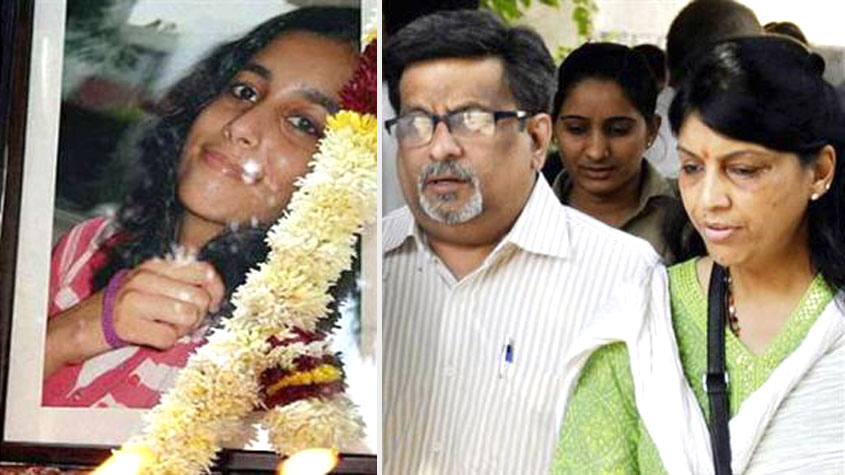 The Allahabad High Court came down heavily on the trial court Judge in the Arushi Talwar murder case, saying he took evidence and circumstances of the case for granted and tried to solve it like a maths teacher or a film director, trying to give concrete shape to his own imagination stripped of just evaluation of evidence and facts in convicting parents Rajesh and Nupur Talwar.

"The learned trial Judge (S.L. Yadav of special CBI court in Ghaziabad) has prejudged things in his own fashion, drawn conclusion by embarking on erroneous analogy conjecturing to the brim on apparent facts telling a different story propelled by vitriolic reasoning.

"Thus, basing the finding of conviction without caring to see that it being a case based on circumstantial evidence, things cannot be presumed and stuffed in a manner like the present one by adhering to self-created postulates then to roam inside the circle with all fanciful whim," said Justice Arvind Kumar Mishra, who on Thursday set aside the order of conviction in the bench headed by Justice B.K. Narayana.

He said that he was in absolute agreement with the conclusion drawn by Justice Narayana which was consensual in the sense that they had elaborate discussions on each vital aspects of the case and they agreed.

Justice Mishra said, however, some reflection needs to be made upon the style and approach of the trial judge who recorded conviction and awarded life sentence to the dentist couple.

He said the trial Judge took evidence and the circumstances of the case for granted and 'tried to solve it like a mathematical puzzle when one solves a given question' and then takes something for granted in order to solve that puzzle and question.

But,the High Court Judge said, the point is that the learned trial Judge cannot act like a maths teacher who is solving a mathematical question by analogy after taking certain figures for granted.

"In all criminal trials, analogies must be drawn and confined within the domain and realm of the evidence, facts and circumstances on record and any analogy which brings facts, circumstances and evidence so placed in certain domain outside the periphery of that domain then that would be a case of certain aberration deviating from the main path," he said.

That way, Justice Mishra said the trial Court Judge has aberrated and by dint of fallacious analogy and reasoning has surprisingly assumed fictional animation of the incident as to what actually took place inside and outside Flat L-32 Jalvayu Vihar, and in what manner he has tried to give live and colourful description of the incident in question.

The whole genesis of the offence was grounded on the fact that both the deceased Hemraj and Arushi were seen by Dr. Rajesh Talwar in flagrante (wrong doing) and thereafter like a film director, the trial Judge has tried to thrust coherence amongst facts inalienably scattered here and there but not giving any coherence to the idea as to what in fact happened.

"The learned trial Judge forgot as to what is the issue in hand. He forgot to travel in and around theme of the charge framed by him against the appellants. It is admitted position to both the sides that no one in fact knew as to what happened. It may be a guess work as to how and in what manner things happened but to base the entire reasoning solely on guess work and give concrete shape to such assumption and then to construe facts and circumstances of the case falling in line with the evidence on record appears to be a futile attempt which attempt altogether acts like a paradox. Certainly such recalcitrant mindset in interpreting facts vis-a-vis circumstances of the case and evaluation of evidence ought to have been shunned.

"Consideration of merit should be based only on evidence and circumstances apparent on record, crystallizing the truth in substance and alluding to certainty of decision, backed up by reasonable analogy and scrutiny by the trial Judge as that alone would always be the best approach while deciding a criminal trial," Justice Mishra said.

"It can by no means be denied that the trial Judge, perhaps out of extra zeal and enthusiasm and on the basis of self perception adopted partial and parochial approach in giving vent to his own emotional belief and conviction and thus tried to give concrete shape to his own imagination stripped of just evaluation of evidence and facts of this case," observed Justice Mishra.

He said that the while appreciating evidence vis-a-vis facts, it was incumbent on the trial Judge to have angled things from a common platform and would not have deviated from that platform as and when the evidence took another turn.

"May be, that the witnesses of fact testified one way and may be that the Investigating Officer conducted the investigation other way but unnecessarily coherence should not be brought in between the two incongruous objectives as that would be a fallacy which the trial Judge has committed in this case," he said

He said the pointer is that the trial Judge should evaluate evidence in its existing form, should not tinge it with his passionate reasoning so as to give a different construction than the one which is naturally reflected and forthcoming.

"Caution enjoins on the trial Judge that he should exercise self-restraint from deliberately twisting facts in arbitrary manner and should refrain from recording finding on strength of wrong premise by virulent and meandering reasoning. The entire judgment is on the whole creation of fanciful reasoning with pick and choose presuming facts with indomitable obstinacy and taking things for granted, thus, basing conclusion on unfounded evidence. The trial Judge is supposed to be fair and transparent and should act as a man of ordinary prudence and he should not stretch his imagination to infinity - rendering the whole exercise mockery of law," he said.

Justice Mishra said that needless to say that in such sensitive cases, the trial Judge should act with utmost circumspection and caution.

"But certain norms should be kept in mind by the trial Judge while he is deciding any criminal case; the parochial and narrow approach to the facts and evidence should be avoided and evidence of a particular case has to be read and construed on its face value in line with the statutory requirement.

He observed that it appears that the trial Judge was unaware of the solemn duty cast by the law as the Judge and has dealt with the entire case in style -- a finesse.

In their judgement on Thursday setting aside the conviction, Justice Mishra and Justice Narayana held that the circumstances of the case considered do not lead to the irresistible conclusion that the appellants alone are the perpetrators of crime in question and on the evidence adduced in this case certainly two views are possible; one pointing to the guilt of the appellants; and the other to their innocence and in view of the principles expounded by the Apex Court in the case of Kali Ram (supra), we propose to adopt the view which is favourable to the appellants.

"In view of the foregoing discussion, we hold that the prosecution has failed to prove its case against the accused appellants beyond all reasonable doubts. The conviction of the appellants recorded by the trial court under Sections 302/34 and 201/34 IPC and that of appellant Dr. Rajesh Talwar under Section 203 IPC and the sentences awarded to them, cannot be sustained. Consequently, both the appeals succeed and are allowed.

"The impugned judgement dated 25.11.2013 and order dated 26.11.2013 passed by Shri Shyam Lal, Learned Additional Sessions Judge & Designated Judge under the P.C. Act, Ghaziabad are hereby set aside. The appellants are acquitted of all the charges framed against them. Both the appellants are in jail. They shall be released forthwith unless they are wanted in some other case subject to their complying with the provisions of Section 437A Cr.P.C," the Judges said.