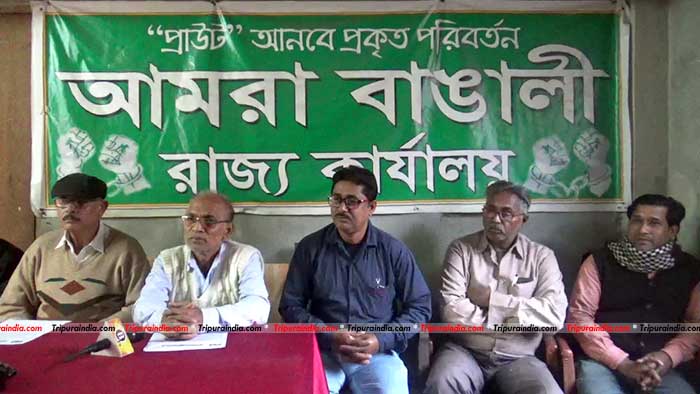 Tripura unit of Amra Bangali has surfaced a new war cry “Bangalistan” in order to confront IPFT's Tipraland demand. The party reasoned that many Bengali families were victimized during the large-scale insurgency and to protect the interest of Bengali community there needs a land inclusively for Bengalis—"Bangalistan. ”.

Amra Bangali leader Hari Gopal Debnath claimed Bengalis were integral part of this land and they should not leave this land at any cost.

“Our demands are simple, the way government resolved the problem of Bru refugees, it should also intervene in the case of victims of insurgency. Thousands of people displaced in the insurgency period and they also deserve government’s rehabilitation package,” Debnath said.

He also sought compensation for the Bengali families who have been subjected to inhuman torture and robbing.

“Many Bengali residences have been robbed and ransacked. Many families are robbed by the Bru refugees during their initial period in Tripura. We demand compensation for them also”, said Debnath.

“No Bengali can be disenfranchise by these laws. We shall not let any Bengali excluded from this land” he told media.

Notably, the party has launched a massive protest in the Kanchanpur area against the Bru settlement pact. Debnath warned the government of massive protest henceforth unless their demands are met.