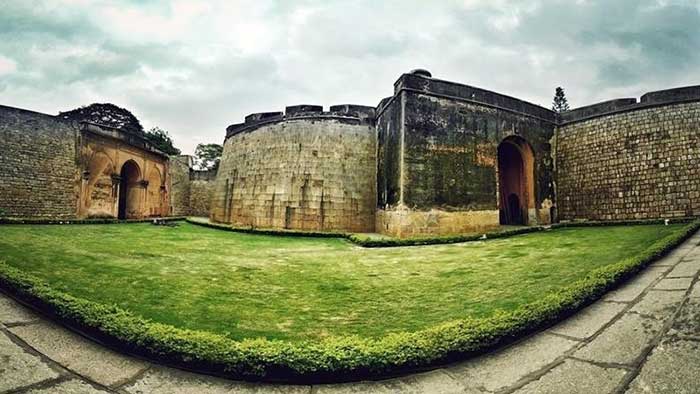 The Bangalore Fort was first built with mud by Kempegowda, a trusted chieftain of Vijayanagar Empire, to form what was the nucleus of this city in 1537. He built a sturdy stone wall which had as many as eight gates. The fort passed through the hands of the Bijapur Sultans, then the Mughals and finally to the Wadiyars of Mysore. Having wrested power from the Wadiyars, when Haider Ali took over Mysore he rebuilt the fort with stone and made it his stronghold and later added a palace within its walls. After the death of his father, Tipu Sultan spent his time between his fort at Bangalore, Srirangapatna, and the Nandi Hills.

The Bangalore Fort was built in an unusual oval shape and only one of its eight gateways is in use now. This is the Delhi Gate, which has some exquisite Persian carved friezes in the inner and outer walls. These friezes are in the shape of arches and include designs that are so much a part of Karnataka. Here we can see ornate lotuses, the Mayura (or peacock), the half elephant/half bird motifs and elephants with entwined trunks. The doors to the Delhi Gate are missing now, but some massive iron knobs -- three on either side -- give us an idea of the enormous doors that must have been hinged on these during Tipu Sultan's era.

There is also a massive inner gate which still has its original doors with iron spikes, still intact, on the upper half while the lower spikes, upto 8 feet, appear to have been knocked down by invaders. A plaque marks the spot where Lord Cornwalis and his men breached the fort.

Tipu Sultan's Summer Palace, built within the walls of the old fort in Bangalore, is a splendid example of Indo-Islamic architecture. The building of this palace was begun by Haider Ali in 1781 and was only completed in 1791 by his son, 10 years later.

The palace is somewhat similar in its use of stone pillars wooden arches and painted walls to the other more ornate palace at Srirangapatna named "Daria Daulat". Tipu named the Bangalore palace "Rash-e-Jannat" -- meaning the abode of happiness and the envy of heaven. This inscription can still be seen carved on the wooden banisters of the staircase.

The palace is built on a low stone platform and is a two-storeyed building with audience chambers in the front and the back. The structure was built entirely with teak and stands adorned with pillars, arches and balconies. It is believed that Tipu Sultan used to conduct his durbar (court) from the eastern and western balconies of the upper floor. There are four smaller rooms in the corners of first floor which were Zenana Quarter.

Beautifully cusped arches in rosewood rise above fluted stone pillars. There are 160 pillars, some that reach all the way up to the ceiling of the upper storey, much in the style of the Diwan-i-aam of Mughal architecture. There are also separate pillars that support the Jharokas on the upper floor. Two flights of stairs from either side, lead up to the central hall, on the first floor.

Fortunately, all the paintwork has not been totally ruined and some of the inner walls still have traces of the original frescoes. Delicate white flowers on a brick red background cover whole walls like exquisite carpets, bordered on all four sides with a raised frieze of trellised gold flowers and leaves, on a white base. The entire design is highlighted with a delicate tracery of black outlines.

It is said that there were earlier frescoes depicting scenes from Tipu's colourful life on some of the inner walls. But there is no trace of them now. The site also holds a painting of a grand throne visualised by Tipu Sultan himself.

Coated with gold sheets and embellished with precious emerald stones, Tipu had vowed never to use it until he completely defeated the British Army. After Tipu Sultan's death, the British dismantled the throne and auctioned its parts as it was too expensive for a single person to buy in its whole state.

The rooms on the ground floor have been converted into a small museum showcasing various achievements of Tipu Sultan and his administration. There are some newly done portraits of the people and places of that time. There is also a replica of Tipu's Tiger, the original being at the Victoria and Albert Museum in London. Also displayed are Tipu Sultan's clothes and his crown on silver and gold pedestals. Silver vessels given by a general to Hyder Ali are also displayed.

The palace, which is under the Archaeological Survey of India (ASI), is set in a well-maintained garden planted originally by Tipu. A keen lover of nature, Haider Ali is known to have created the famous Lal Bagh gardens at Bangalore, while Tipu Sultan added his share of rare trees brought from other lands. There was also a splendid garden which has undergone a change. The original frontage of Tipu's Palace which had fountains and flowering trees, has now given way to lush green lawns encircled by beds of seasonal flowers.

The roar of the "Tiger of Mysore" died down more than 200 years ago with the arrival of the British in 1799, but most Bangaloreans continue to harbour feelings of great pride in the exploits of this valiant son of the state. It is thus rather strange that despite this keen interest in Tipu Sultan, very few visit the fort and the Summer Palace, which are among the only architectural sites in Bangalore connected with the lives of Tipu Sultan and his father Haider Ali.