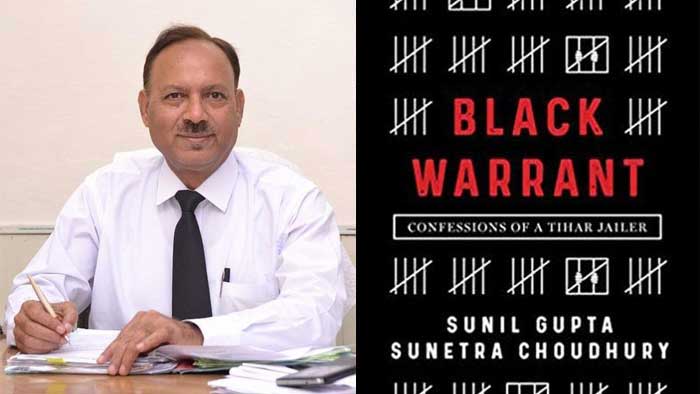 "There is quite a different world that plays out inside the boundaries of a jail. It includes much more dangerous things and situations than anyone can imagine," says former law officer of Tihar Jail, Sunil Gupta, who has spent 35 years of his life monitering key posts as a correctional officer.

"I would not say that it was a cakewalk for me. Whatever I have witnessed there, I can only say there has been no jailer who would not have received a threat from criminals.

"Criminals and threat are the integral part of a jailer's life. This is my personal experience," said Gupta who retired as the law officer of Tihar Jail in 2016 and presently hogging media attention because of his book "Black Warrant" that he co-authored with journalist and writer Sunetra Chaudhary.

Gupta spoke exclusively with IANS after the launch of his book at an event in Defence Colony, here. According to both authors, the book is a collection of untold stories from behind the bars.

Though, jails believed to be an after society accommodation of brutal, notorious, fed-up and sometimes 'oppressed' criminals but there are a few stories that will pull at your heartstrings, said Gupta.

For instance, "The Jessica Lal murder case: considered as one of the rarest crime in history and its murderer, Sidharth Vashish alias Manu Sharma, earned only hatred but he also has a different face.

"Tihar Jail produces varieties of products by engaging the criminals in some rigorous activities and pays them money in return. These products come in the market under the brand name of 'TJ'".

"Earlier, the jail staff applied all techniques to improve the revenue from these products but nothing worked. Then Sharma gave some ideas that catapulted the turnover from Rs 3-4 crore to Rs 14-15 crore annually," said Gupta.

"When Sushil Sharma started serving his jail term, there is no doubt that his behaviour was strange. But gradually he changed from that of an imposing personality who 'ordered' others into one who seamlessly co-ordinated with everyone, including inmates and staff, and today he is a completely transformed being -- all well-mannered," Gupta said.

Answering about making co-ordination with criminals the Tihar Jail during his service, Gupta said: "I can't say anything about other staff. But as a jailer, I used to receive threats from criminals. What sort of jailer would someone be who had not received threats, its an integral part of a jailer's life.

"During my service and even after retirement, I had to face these things. It, however, depends on the jailer that how he handles the situation".

"Black Warrant" also talks about the jail visit of socialist Anna Hazare and other related incidents.

"I twice approached Arvind Kejriwal (the Delhi Chief Minister) and informed him about misdeeds of director general of jail. I told him everything without any fear with an expectation that he would take some steps to stop those illegal activities in the jail premises.

"But nothing came of it," said Gupta, adding "only then I realised even after 35 years of service I have failed to learn the 'jail politics'."