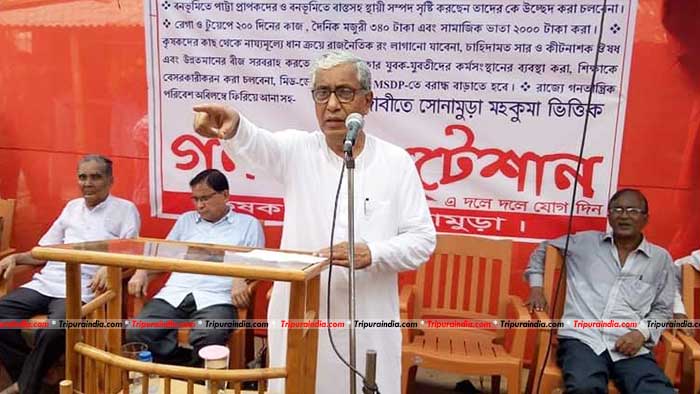 “The present Chief Minister has no courage to ask for extra funds from the central government. Instead, the government is imposing taxes on the people of the state underneath its claim of self-reliance. Even, they did not even leave a necessary service like health” Sarkar told a gathering organized by Khet Majdur Union at Sonamura.

Terming the BJP’s election manifesto—vision document a “Dream Document”, he said, people of the sate did not understand us before the elections. They made people believe on their pre-poll promises—a dream document. But, it failed blatantly to execute its promises. A section of BJP workers who are close to the leaders are getting all the necessary benefits and the bigger part is in distress, Sarkar claimed.

Speaking on MGNREGA, he said, during the Left rule on average every year 82 to 85 wage-days were recorded. Even, the MGNREGA act was passed in the parliament due to the immense pressure put by the Left MPs. And, today the scenario is visible to all. The highest average on MGNREGA stands at 39 days. And, among this wage-days, the largest parts goes to a section of ruling party workers known as Pristha Pramukh or representative of Mandal, Sarkar claimed pointing fingers at a section of the ruling party workers.

During his about an hour long speech, Sarkar also raised questions on a range of issues starting from introduction of ESMA, dissent of employees and employment crisis.