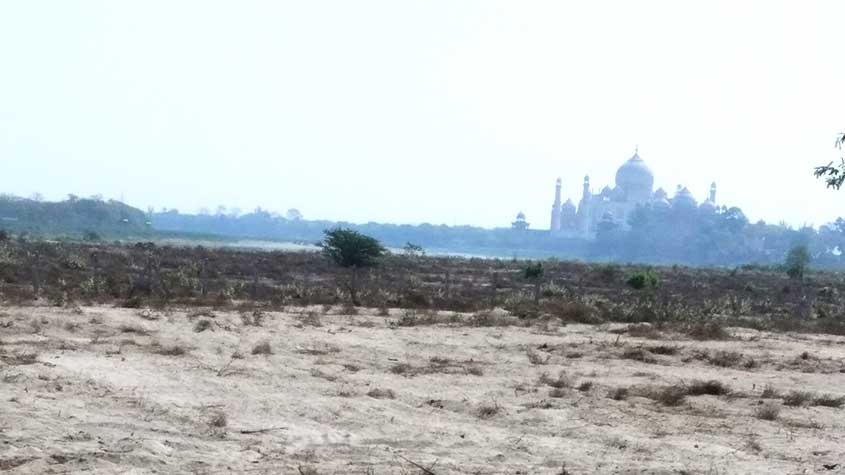 Despite Prime Minister Narendra Modi's pre-poll promises to voters in Agra and the holy cities of Mathura, Vrindavan of restoring the original glory of the Yamuna river, not a single baby step has been taken in this direction till date since 2014, say activists.

The Yamuna continues to stink, with its water being polluted by toxic effluents and waste from Delhi and upstream cities.

"Forget human beings, even historical monuments including the world heritage monument, the iconic Taj Mahal, along its bank, are not safe as pollutants in the river not only create visual pollution but also endanger the protective eco-ambience in the vicinity," says environmentalist Devashish Bhattacharya.

"If people took the election rhetoric seriously it is not their fault. The public perception five years ago was that here was a party with a difference that would give top priority to basics, but alas that was not to be," says green activist Shravan Kumar Singh. He recalled how Union Minister Nitin Gadkari had promised on several occasions that steamers and a ferry service would bring tourists from Delhi to Agra, within two years.

"When there is no water in the river, how does one expect a ferry service to be operational. Perhaps it would be prudent to organize "Desert Safaris" on the dry river bed in Agra," says Ranjan Sharma, an activist.

The local administration claims more than 40 drains have been tapped. Municipal environment official Rajiv Rathi says waste liquid was now being treated at half a dozen STPPs in Agra, before being discharged in to the river.

"But the ground reality is vastly different," counters activist Satyam Sharma of the River Connect Campaign. The Bhairon nala, adjacent to Etmauddaula Park, and the Mantola Nala, close to the Taj Mahal, flowing along the Fort, are good examples that expose the big lie," adds eco-activist Chaturbhuj Tiwari.

"The problem is two-fold, qualitative and quantitative. One, the river is already dry, just a month after the fairly good monsoon rains this year. Two, what flows down in the river from Delhi is not water, but chemical liquids that kill even bacteria. This toxic liquid is emitting foul and noxious gases and corroding the foundations of structures along the banks of the river," explains Surendra Sharma, president of the Braj Mandal Heritage Conservation Society.

Even after hundreds of petitions, memorandums, representations, demonstrations and protests, successive governments in the state and at the centre, have been pathetically apathetic to demands for de-silting and dredging of the Yamuna river in Braj Mandal, says angry activist, astrologer Pramod Gautam. We have been demanding a barrage or a check dam downstream of the Taj Mahal for three decades now, but only promises have been made and no action, Gautam adds.

State government officials now say a new survey for a rubber dam would be undertaken shortly near Nagla Paima, downstream of the Taj. Interestingly, the foundation stones have been laid twice for the construction of a barrage on the Yamuna in Agra, but that was all there was to it. "Now even those stones have disappeared," notes river activist Rahul Raj.

Tourists who visit the Taj Mahal and other historical monuments are aghast to see the polluted Yamuna. Many even wonder why Mughal emperor Shah Jahan chose this site for constructing his dream project, according to tourist guide Ved Gautam.

The earlier Congress governments did nothing for the Yamuna, the Akhilesh Yadav government focused on the 140 km long cycle track from Etawah to Agra, now in a shambles, the Mayawati government began work on the controversial Taj Heritage Corridor along the Yamuna which brought her government down in 2003. "Now we have nine MLAs and two MPs of the Bharatiya Janata Party, but the Yamuna is not on their agenda. They talk of Vikas all the time, but saving the lifeline of the Braj Mandal, is least among their priorities," complains Pandit Jugal Shrotriya, priest of the famous Sri Mathuradheesh temple along the Yamuna in Agra.

Tourism industry leaders say the Yamuna's good health is necessary for the safety of the monuments along its banks, in particular the Taj Mahal, whose foundation needs moisture round the year.

"Without water the river is becoming a breeding ground for mosquitoes and insects that deposit their green excreta on the surface of the Taj Mahal, every now and then. This needs to be cleaned up periodically," says green activist Amit Kohli.

The biggest threat to the Taj Mahal is the polluted Yamuna which needs cleaning and uninterrupted minimum flow of water to keep it alive. "Water in the river will not only enhance aesthetics but also absorb pollutants and control the alarming level of dust particles in the ambient air (SPM)," says legal activist Deepak Rajput.