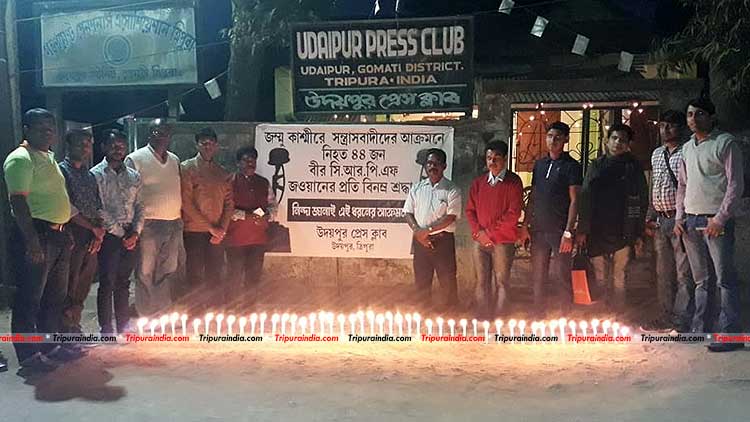 Different organizations of Dharmanagar organized a silent rally today expressing mourns and sympathy for the Martyr CRPF jawans and condemning the fiercest terrorist attack on CRPF convoy at Jammu and Kashmir yesterday.

They demanded strong action against terrorist and Pakistan who is patronizing the terrorists.

Meanwhile North District Secretary of Bajrang Dal Swapan Bhattacharjee strongly protested against the heinous terrorist attack on CRPF jawans at a street corner meeting today. He said, Pakistan has been trying harming our country by terrorist attack since 1947. Pak has chosen the policy due to failure of the country to harm India politically. They should get befitting reply right now. Besides, different social organizations observed silence by lighting lamp on the bank of Kalibari Dighi.

Our correspondent from Kamalpur added that the organizers of Shahari Samritdhi Utsav under Dindayal Antyodaya Yojona-National Urban Livelihood Mission expressed their tribute to the Martyr CRPF jawans in blast of Pulwama by maintaining silence for some time today. Besides, the senior citizens were felicitated and gas cylinder and stove were distributed among the beneficiaries under Ujala Yojona as a part of the Utsav. Speaking on the occasion Chairperson of KMC Prasanta Sinha sought cooperation of all to provide housing, to develop skill and empowerment women at Kamalpur step by step.

Our correspondent from Sonamura added that students of different schools of the subdivision expressed their tribute the Martyr CRPF Jawans by maintaining silence during prayer meet today. The activists of BJP organized a silent rally at the subdivision sadar in the evening by lighting candle in protest of Pulwama Massacre yesterday.

Meanwhile our correspondent from Udaipur added that keeping parity with entire country the members of Udaipur Press Club expressed their tributes to 42 Martyr CRPF Jawans by lighting candle at the premises of the club in the evening today. Besides different social organizations, clubs of Udaipur organized silent rally with candle light to pay their tribute to the Martyrs of the nation. From the rally they condemned Pakistan and demanded befitting punishment of terrorists.