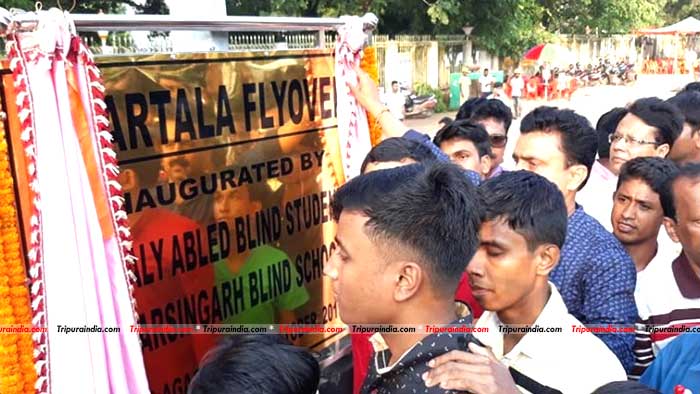 State’s first ever yet controversial fly-over connecting some of the major city points of the city was inaugurated today. The project was opened for commuters in what appears to be a “cold” ceremony as none of the ruling government members—Ministers or MLAs joined the inaugural ceremony.

The fly over was inaugurated in the hands of “Divyangajan” which appears to be a unique gesture. The higher officials of the PWD department opened the entrances which were kept locked after completion of the project following a series of inquiries by the vigilance and economic offence department of the state police. The former PWD Minister and present Deputy Leader of the Opposition Badal Chowdhury had been summoned a number of times by the sleuths of vigilance as there were allegations of large scale corruption in the construction process.

However, as soon as the entrances of the fly-over were opened, commuters started using the route and the flyover claimed all the social media hog of the Puja.

Notably, the Fly Over was constructed at the cost of Rs 250 Crore and the length of the fly over is 2.26 Km.