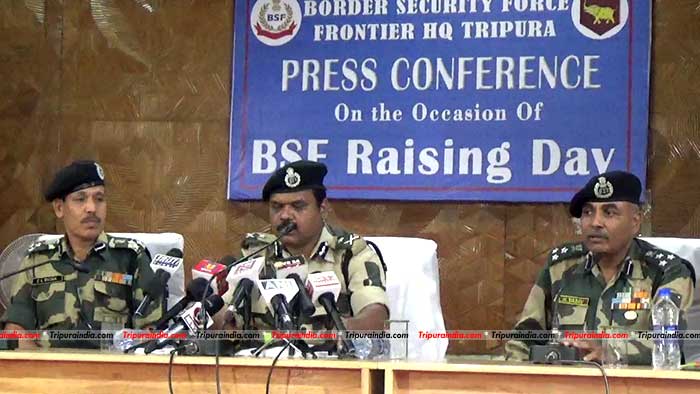 The trans-border smuggling active along the Indo-Bangla international fencing in Tripura are steadily switching over to YABA tablets from cannabis since last few years, precisely, after the new government and law enforcement agencies started taking major ant-cannabis drives.

Addressing a press conference here at BSF sector headquarters, Inspector General Solomon Yash Kumar Minz said that the seizure records showed that smugglers were now switching over to YABA tablets since the items are smuggling-friendly and difficult to be traced by the enforcement agencies.

“Anti smuggling activities are considered to be the core areas where the BSF is focusing more and more nowadays. We have seized 8292 Kg ganja this year in the state with an approximate market value of Rs. 4.86 crores, whereas the quantity of YABA seizure is 3.51 lakh tablets, which is estimated to have a market value of Rs. 17.57 crores”, the official told reporters.

While ganja worth Rs 11.14 crore was recovered during raids and operations in 2018, this year’s figure’s recorded a dip and stood at Rs 4.86 crores.

The impact of the crazy drug was also visible on other ‘popular’ smuggled drugs in the state such as phensidyle, a banned cough syrup. While Rs 45.91 lakh worth phensidyle was recovered here last year, the figures have reduced to Rs 38 lakhs this year.

BSF IG Minz said that the border guards had succeeded to trace the origin of these drugs somewhere in the Indo-Myanmar border but they were still to track the manufacturing dens.

“We can’t say where these are manufactured. We know there is no manufacturing unit of Yaba tablets in Tripura or in the adjoining places. This state is very trickily used as a corridor for smuggling these tablets into Bangladesh. But there are apprehensions of our youths adopting this narcotic can’t be ruled out straight away. So, this crazy sale should be stopped in no time”, Minz told media.

Out of 856 Km international border with Bangladesh in Tripura, 67 Kms

Meanwhile, infiltration and exfiltration along Tripura frontiers have come down, IG Minz said. 236 person were caught while illegal crossing the border; these include 117 Indians, 65 Bangladeshi nationals, 53 Rohingyas and 1 Nigerian national. Few National Liberation Front of Tripura (NLFT) insurgents surrendered before BSF as well.

BSF also briefed about its community service activities today as part of its observation of Raising Day of the corps on December 01. The border agency is offering pre-recruitment training to youths in rural areas of Tripura, organized 14 medical camps this year, and installed 39 solar power units in different parts of Tripura among other activities.