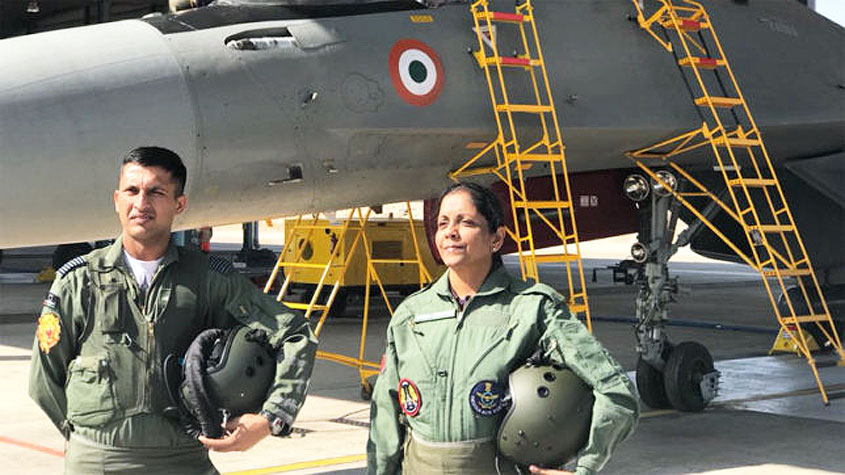 The supersonic jet piloted by Group Captain Sumit Garg carrying Sitharaman took off from the Air Force station here in Rajasthan. She was seen seated in the cockpit for the 40-minute sortie.

The Minister told the media that she felt "very proud and thankful" to the Air Force for letting her have the experience of flying in a fighter craft.

"It actually tells me with what rigor, practice, what level of readiness and how quickly they (defence personnel) have to respond to situations. It was eye-opening and memorable," Sitharaman said.

With this, Sitharaman became the second Indian woman leader to fly in a Sukhoi-30 jet. Earlier, then President Pratibha Patil had flown in the fighter in 2009.

Sitharaman donned a helmet with oxygen mask and wore a flight overall and a G-Suit, also called anti-gravity suit -- worn by pilots for comfort when the jet takes turns.

The Minister tweeted her pictures familiarizing herself with the fighter aircraft before taking off. The Sukhoi SU-30 MKI is a multi-role fighter developed by Russia's Sukhoi and built under licence by India's Hindustan Aeronautics Ltd. In November 2017, India successfully flight-tested the air variant of BrahMos supersonic cruise missile from the fighter jet.

After taking over as Defence Minister in September, Sitharaman has been visiting Army, Air Force and Naval bases frequently. She was onboard the aircraft carrier INS Vikramaditya in the Arabian Sea to witness the operations of the MiG-29 fighter on the deck of the carrier.

The visits are part of her efforts to gauge and review the operational preparedness and combat capabilities of the forces.