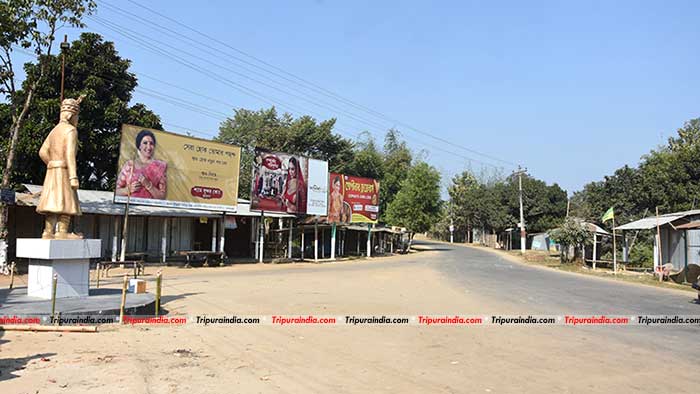 As Tripura's tribal autonomous district council areas observed shutdown on Monday against the Citizenship (Amendment) Bill (CAB), demonstrations were also held by NDA ally Indigenous People's Front of Tripura (IPFT) in Delhi's Jantar Mantar to protest against the CAB and also to press for their demand of a separate state for the tribals.

The 12-hour shutdown call was given by a local tribal based party, the Twipraland State Party in the Tripura Tribal Areas Autonomous District Council (TTAADC) areas, which evoked a mixed response, police and district officials said.

A senior police official in Agartala quoting reports from the various districts, said that government offices, banks, educational institutions, shops and markets were open in some parts and were non-functional in some places under the TTAADC areas.

According to the officials, most private and passenger vehicles were off the roads. Police evicted the picketers who tried to block the roads in a few places. No major untoward incident was reported from anywhere in the TTAADC areas.

Examinations in colleges were rescheduled in view of the dawn to dusk strike as a preacutionary measure.

In Delhi, the IPFT, led by General Secretary and Tripura Forest and Tribal Welfare Minister Mevar Kumar Jamatia on Monday held a seven-hour long demonstration in Jantar Mantar to protest against the CAB and also to press for it's demand for a separate state for the indigenous tribals.

IPFT General Secretary and party spokesman Mangal Debbarma told IANS from Delhi over phone that a delegation of the party would also meet Prime Minister Narendra Modi, Home Minister Amit Shah, Tribal Affairs Minister Arjun Munda and DoNER (Development of North Eastern Region) Minister Jitendra Singh to push for their demands. Their demands include the introduction of the Inner Line Permit in Tripura to protect the tribals, who constitute one third of Tripura's four million populations.

The IPFT has been agitating since 2009 for the creation of a separate state for the indigenous tribals by upgrading the TTAADC.

The IPFT leaders in September also met various Central Ministers and top BJP leaders in Delhi to push for their demands. Earlier also they held demonstrations in the national capital to highlight their demands.

The CAB seeks to fast track giving Indian citizenship to the Hindus, Sikhs, Buddhists, Parsis, Christians and Jains from Bangladesh, Pakistan and Afghanistan who entered India till December 31, 2014.