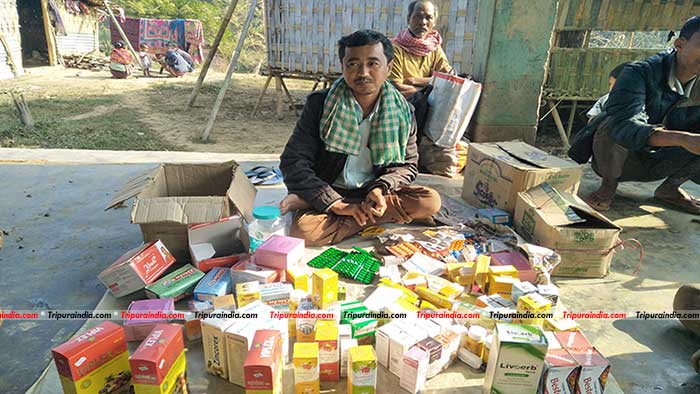 There is no dearth of unsung “Heros” in this part of land, the Heros who just do not serve the mankind for mere recognition, money or other worldly bliss but to serve their inner instinct, designed in such way that they cannot resist themselves from attending the fellow in need.

Such a hero is Kamalijoy Tripura (80), a self-styled octogenarian doctor who is relentlessly working in the remote pockets of the Chwamanu, a rural block under the Longthorai valley sub-division. Most of us have watched “Munna Bhai MBBS”—a feature film that made us aware of how an individual with irresistible intent cured a person what was, probably, impossible before the science.

Kamalijoy is too of no exception, he has no academic command on medical science or in medicines but he stands as the only hope for the people living in the hilly pockets of Chwamanu. The decent persona of him always eases to the patient who meets him.

In his long 19 year work life he had treated countless number patients. No diseases that are frequent in these areas today stand tall in front of his medicines. Locals say, he had cured so many people with serious problems of frequent fever, Diarrhea, Dysentery and malnutrition who are now very much fit and living a healthy life.

For the villages like Gobindabari, Natinmura, Thalchara, Teish Killo, and a few more, he is now a living god, a doctor who is just a call away, where availability of medical services are pretty negligible in count. According to locals, the only health sub-centre is available here is situated at the Thalchara but the facilities are not up to the mark. “It always runs in constraints of medicines” alleged a veteran local Mading Sing Tripura.

The self styled doctor who is also a member of the local village committee while speaking to the correspondent said, it is almost 19 years I am doing all this, in the eyes of law it might be an offence but as an elected representative of such an underprivileged area, who had witnessed the dark side of death due to harsh diseases like Malaria, Diarrhoea and extreme fever will never judge this job as an offensive one.

Such frequent deaths in the region drove me to take a step so that no deaths, at least, due to lack of medical attention could take place and with my very little experience in the medical field i jumped to serve the people, recollected the octogenarian Kamalijoy.

One Ushajay Tripura another septuagenarian of the local said, since last many years I am his patient, this year I touched 70 but still can’t feel only because of his treatment.

However, such blissful words for Kamalijay is not rare in this part of Chwamanu, a doctor treating in the government sheds of Thalchara market with a row of patients waiting could not be considered as a common phenomenon in this age but we all have to remind that there is always an exceptional story to be told in this incredible land.

Moreover, Kamalijay’s fight of serving the poor also proves in what extent the government machineries of the state are in back-foot in providing basic amenities to the poor. I