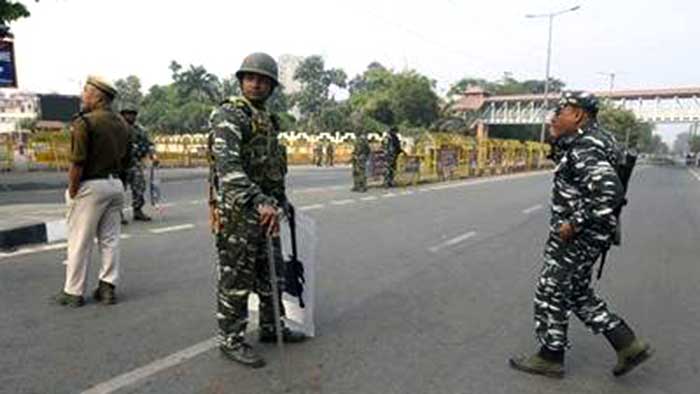 The Assam and Tripura governments have increased security at the Bangladesh Assistant High Commissions here in view of the stir against the amended citizenship law, officials said on Saturday.

The situation in Assam is gradually improving, while Tripura, Mizoram, Manipur, Meghalaya and other northeastern states are almost normal after violent agitations against the citizenship act earlier this week.

Officials in Guwahati and Agartala said that security has been further strengthened at the Bangladesh Assistant High Commission offices and additional security forces deployed in and around the complexes of the two diplomatic missions.

Bangladesh media reported that acting Foreign Secretary Kamrul Ahsan held a meeting with Indian High Commissioner to Bangladesh Riva Ganguly Das at the Ministry of Foreign Affairs in Dhaka and requested the protection of the personnel and properties of the mission by the host government.

"Ganguly assured that the authorities concerned of the Indian government are being immediately alerted to enhance security of the chancery and residential premises of the Bangladesh Assistant High Commission in Guwahati," the media report said quoting officials of the Foreign Affairs Ministry.

According to the Airport Authority of India's (AAI) Regional Executive Director Sanjeev Jindal, almost all airports in the northeastern states are operating normal flights to and from northeast India and other parts of the country.

"We are operating almost all the airports of northeastern region and our airports are open for passengers over night on Friday. Even if there is no flight we are allowing the passengers to use guest houses, lounges, water, heating and are trying to provide food as well," Jindal said.

He said that except Dibrugarh (in Assam), other airports in Guwahati, Silchar, Jorhat, Teju, Tezpur (all in Assam), Agartala (Tripura), Imphal ( Manipur), Dimapur (Nagaland) and Lengpui (Mizoram) are operating normally.

In Dibrugarh, the unavailability of adequate private or public transport systems is causing the suspension of all nine flights to and from Dibrugarh airport except Army chartered and helicopter services.

"Challenges are there for men and material but we all stakeholders are working hard in close coordination and serving the people for their safe movement in and out of northeastern region," Jindal said.

The Northeast Frontier Railway (NFR), which operates trains in some parts of Bihar and West Bengal besides the entire northeastern region, only cancelled the trains touching tension-ridden Dibrugarh in northern Assam.

"Due to security reasons we are not operating trains linked to Dibrugarh. However, over 70 to 75 per cent trains are already either operational or to be run later in the day in the northeastern states," an NFR official told IANS.

"The availability of petrol, diesel and LPG would be normal in a day or two. Efforts are on to transport these petroleum products to all the northeastern states," an IOC official said in Agartala.