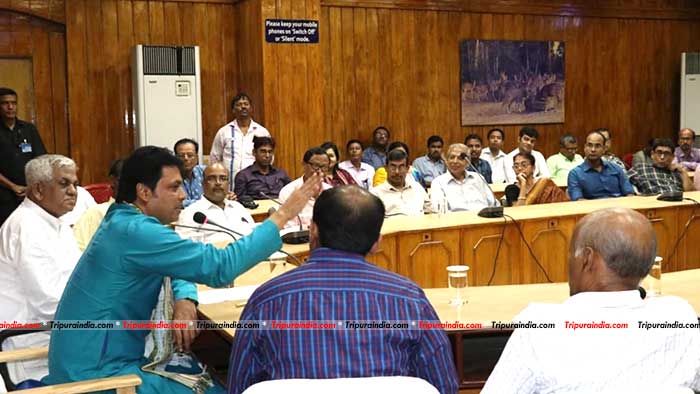 Chief Minister Biplab Kumar Deb today hoped that Sabroom, which is perhaps the last most township in the southern part of the state would become the commercial capital of the state after meeting Bangladesh Prime Minister Sheikh Hasina at New Delhi last evening.

Addressing a meeting of local businessmen of the state at Bir Chandra State Library, he said, “the ambitious Feni Bridge being built over the river Feni will be opened for operation on March 30, next year. The Bangladesh Prime Minister has ensured that all the necessary attempts will be taken to ensure the speedy completion of the remaining work within the stipulated period of time.”

We have also proposed, he added, the Prime Minister of Bangladesh to ensure double way road connectivity from Chittagong port to Ramgarh, the route which will be used as the world road in the other side of the fencing. The Prime Minister has also assured to extend all the logistic support to the Tripura government, he included.

The Chief Minister also told the gathering of the traders that an initiative had been undertaken to set up an ICP (Integrated Check Post) in Sabroom so that more emphasis could be given on bilateral trade and relationship. “Sabroom will be the next logistic hub for the state. In next few years, state’s economy will largely depend on Sabroom” the Chief Minister hoped.

Speaking on the other projects that has been discussed between both the Countries, he said, “A water treatment plant will be set up here in Sabroom. The plan was chalked out in the year 2012 but due to some issues with river Feni, the project went up to a halt. Central ministry of Jal Shakti has approved the project and an agreement, in this regard, will be signed today at New Delhi.”

“Issues related to introduce flight services were also discussed in the meeting. In a verbal discussion with Bangladesh Prime Minister, I have personally approached her to take proper initiatives so that flight services could be introduced from Tripura and Bangladesh. I have pointed out that how people of Bangladesh prefer Tripura for taking flights. And also informed her as to how Tripura people prefer Dhaka for international travel for cost effective journey” the Chief Minister told the gathering.