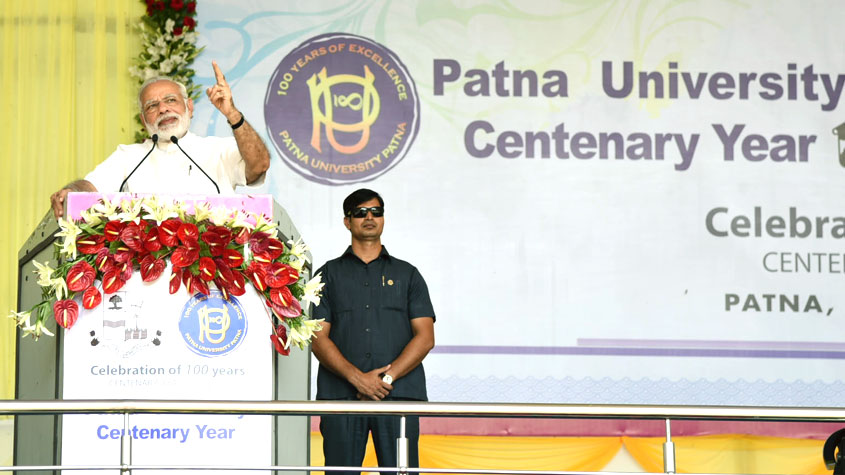 Prime Minister Narendra Modi on Saturday said it was a "blot" that Indian universities do not figure among the top 500 of the world and noted that the government has decided to give autonomy and Rs 10,000 crore to top 10 public and private universities over the next five years to make them world-class.

Addressing the centenary Celebrations of Patna University here in presence of Bihar Chief Minister Nitish Kumar, Modi said Indian universities such as Nalanda and Takshashila attracted students from all over the world.

"We are not among the top 500. We should remove this blot or not. The situation should change through our determination and hard work," Modi said.

He said the government has come with scheme to make 10 private and 10 public universities world-class by providing them autonomy from the constraints of government rules and freedom to grow.

He said the selection will not be on any recommendation. "The universities will be a selected on the basis of a challenge in which they will be required to prove their mettle. The selection will be based on factors such as history, performance and its roadmap reach global benchmarks. A third party professional agency will be involved in the selection process," Modi said.

"Patna University should not stay behind (in the challenge)," he said.

Modi said reforms in the country's education sector have progressed at a slow speed and there have been differences among educationists which had hampered innovation with the governments too not measuring up to the task.

The Prime Minister said that for two years he heard arguments for and against granting more autonomy to Indian Institutes of Management (IIMs) and then a big decision was taken.

"It is for the first time that the IIMs are out of government control and have been professionally opened up. This is a big opportunity for them and they would make the best use," he said.

Modi said 65 per cent of the population of the country was below 35 years in age and the dreams of development can be fulfilled.

"We need to understand the changing trends across the world and the increased spirit of competitiveness. In that context India has to make its place in the world," Modi said.

He appreciated the efforts Nitish Kumar towards development of the state and said the progress of eastern India is the Centre's topmost priority.

"The commitment of Nitish Kumar towards the progress of Bihar is commendable. The Centre attaches topmost importance to the development of eastern India," Modi said.

He said when the country celebrates the 75th anniversary of Independence day in 2022, he wants to see Bihar standing among the list of prosperous states.

Modi also said that many top level officials of civil services are students of Patna University.

"In every state, the top levels of the civil services has people who have studied in Patna University. In Delhi, I interact with so many officials, many of whom belong to Bihar... I consider it my honour to visit Patna University and be among the students. I bow to this land of Bihar. This university has nurtured students who have contributed greatly to the nation."

He said that Bihar is blessed with both 'Gyaan' and 'Ganga.' "This land has a legacy that is unique," he said.