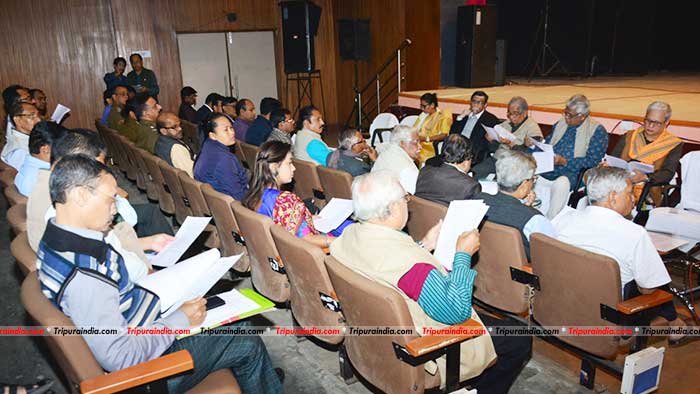 Former Chief Justice of the Supreme Court of India Ranjan Gogoi is likely to attend 38th Agartala book fair. He has been invited by the book fair committee, said Deputy Chief Minister Jishnu Debbarma who is also the chairman of the book fair steering committee.

Addressing a Press conference here in Rabindra Shatabarshiki Bhavan after a meeting of the steering committee, Debbarma said, “This is for the first time the fair will be organized in such a gigantic way in Hapania international fair ground to pull more and more crowd. And, as the venue has been shifted from the city, it has been decided to start free services for the book lovers from several city points to the fairground”.

It is worthy to be mentioned here, Tripura Publisher’s guild had already refused to participate in Agartala Book Fair citing change of venue. The guild members claimed that if the venue was shifted from the children’s’ park—located in the city to Hapania fairground which is a few kilometers away from the city might cause huge loss of business to the booksellers.

Laying emphasis on the importance of book fair, Deb Varma further said, in this age of e-books and digitized version of information, traditional way of reading is not being practiced as it happened earlier. And thus, the importance of book fair to revive the culture of reading is significant. He also urged the students of the state to participate more and more in the fair to give it a shape of success.

Announcing the theme of this book fair—“Amar Tripura Amar Sanskriti (My Tripura My Culture)” Director of ICA department, Ratan Biswas said, the theme has been chosen as this fair will be focused on promoting the culture of the state. The 12-day long fair will remain open from 2 pm to 9 pm everyday and on the weekdays it will remain open till 9:30 pm. “Not less than 3000 artists from different parts of the state will perform during the fair. Apart from this a cultural group from Bangladesh—“Paharer Rang” will also going to perform in the fair,” Biswas added.

Speaking on the stalls, he said, “37 book stalls are coming from West Bengal, 6 from Guwahati, 5 from Delhi, including some stalls from Bangladesh, Goa, Daman and other parts of the country are coming in the fair. 62 stalls of Tripura’s own publications will be there in the fair”.

Notably, a new award for exemplary contribution in engineering sector—Maharaja Bir Bikram Manikya Bahadur Debbarman award had been introduced. A cash reward of Rs 75,000 would be offered to the awardee under this category. Other existing awards would be also given.