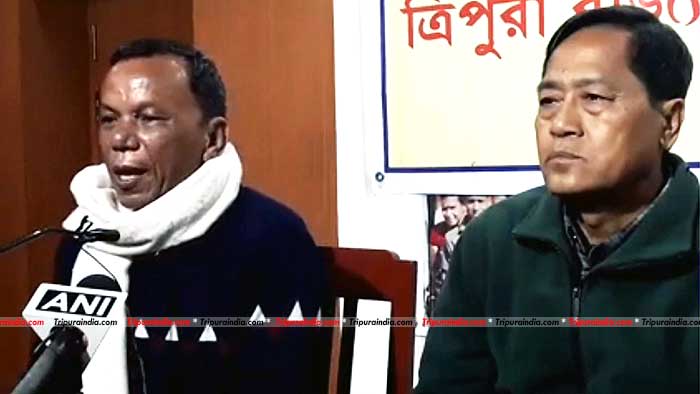 Tripura Ganamukti Parishad today alleged that the series of protests being held by several political and apolitical fronts in the state steadily taking a communal turn and spearheading tension between certain communities.

GMP president and former MP Jitendra Chowdhury said the way protests are being conducted; it is nothing but an attempt to foment tension between certain communities in the name of the protests.

“Our party, definitely oppose the black act, but it does not mean that the protests could be done in any way. If this continues, the ruling force will get the opportunity to curb the voice of dissent very easily” Chowdhury told a news conference on Monday.

Referring to the communal tension took shape at Gandacherra, Kanchanpur, Manughat and certain parts of Khowai district last month, he said, it has been observed as to how the protests took a turn of conflicts between certain communities living peacefully together followed by the passage of the law.

“Though, the stages are different, the faces are different and also the satiations are different, our motive should be to thwart the law from being enacted rather than going against each other of us. We appeal everyone to continue protests but not in such way that would push the state towards some dangerous end” Chowdhury added.

Chief Executive Member Radha Charan Debbarma, who also remained present at the Press conference, announced a series of protests against the CAA.

“On 22nd January next, the Supreme Court will hear GMP’s petition on CAA. The party has decided to hold a series of protests at the stretch of one week from January 17 to January 25 next. Mass sit-in demonstrations and rallies will be held in almost every sib-division head quarters of the state” Debbarma told media adding that central public meeting would be held at Swami Vivekananda ground on February 08 next.

Debbarma also drew the concern of the government about the serious financial crunch the people of rural areas were facing. “The festive season is round the corner. But there is no MGNREGA work or payments. This will lead to a devastating situation” he added. The party also questioned against government’s decision of recruiting 3,300 posts through outsourcing and also asked the government to resolve the plight of 10,323 teachers who were set to be terminated on March 31 next.