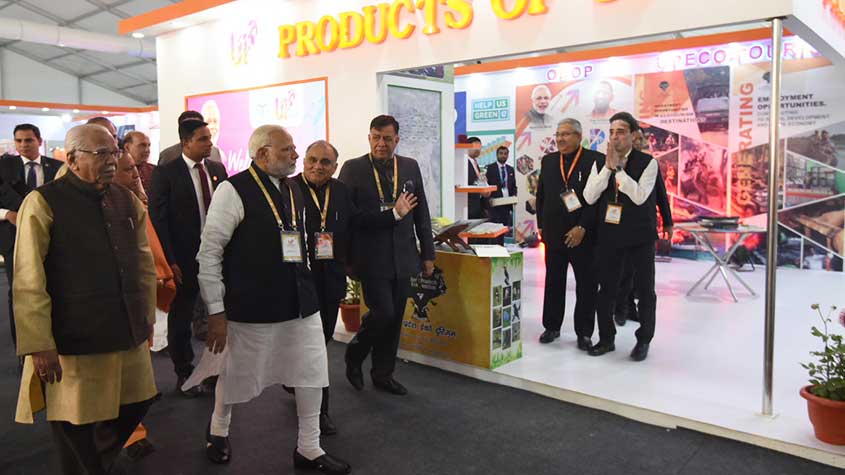 Prime Minister Narendra Modi on Wednesday announced that his government will establish a Rs 20,000-crore defence industrial production corridor in Bundelkhand -- a region divided between Uttar Pradesh and Madhya Pradesh -- that will generate 250,000 jobs and bring development to one of the most impoverished regions of the country.

"I am making an important announcement. In this year's budget, we had announced that we will establish two defence industrial production corridors. One of them will be in Bundelkhand," Modi said addressing the inaugural session of the two-day Uttar Pradesh 'Investors Meet' at the Indira Gandhi Pratishthan in Lucknow.

The government had earlier announced that it would develop two such corridors. The first of the two, announced by Finance Minister Arun Jaitley in his budget speech, is being built between Chennai and Bengaluru - connecting Kattupalli port, Chennai, Tiruchi, Coimbatore and Hosur.

The project, he said, would bring an "investment of Rs 20,000 crore and generate employment avenues for 2.5 lakh people".

The Prime Minister said the decision to come with the defence production corridor to Uttar Pradesh was taken keeping in mind the developmental requirements of Bundelkhand region.

Modi said Uttar Pradesh had a vast potential for development but needed policy, planning , performance. He lauded the efforts of Chief Minister Yogi Adityanath for setting the state on the path to give a "super hit" performance.

The Prime Minister pointed out how air traffic in the state had grown by 30 per cent in the past one year with just three international airports in Agra, Varanasi and Lucknow.

He said it was more than the national average and indicated a huge potential in the state for civil aviation.

The Prime Minister said more airports will be initiated in multiple parts of the state to realize his dream of "hawai chappal pehne wala bhi, hawa mein udna chahiye".

"New airports will give it (the air traffic in Uttar Pradesh) an additional boost. The state is also home to the largest rail network."

Modi said the Centrally-sponsored Prime Ministerial Kisan Property scheme will reduce crop-grain-fruits and waste of vegetables as the government was also keen on modernizing the entire supply chain and infrastructure for the agri and allied sectors to help in doubling the farmers income by 2022.

He said the initiatives would help the state in particular because it is ranked number one in the country in production of foodgrains, wheat, sugarcane, milk, potato production. It is number two in terms of vegetable production and third in fruit production.

He also called for a storage and marketing grid, underlining how the produce of farmers was wasted in a big way because of lack of facilities.

Modi suggested that local manufacturing units for chips and similar products could minimize the losses inflicted on farmers due to lack of storage and transport facilities.

The investors event organised by the Yogi Adityanath government is aimed to showcase the investment opportunities in the state. Corporate honchos are attending the summit.

Modi also praised the Uttar Pradesh government for curbing red tape and rolling out the red carpet for investors and taking decisions that have linked industrial development with employment generation.

"There is no dearth of resources and opportunities in Uttar Pradesh where you find 'Lucknowi chikankari', Â‘Banarsi zardosi', brassware of Moradabad and glassware industries of Firozabad," Modi said.

He called for "inter-linking of expertise and efficiency" and lauded the state government for its innovative 'one district, one product' scheme.

"This is a game changer and I am sure the artisans and industries in places like Firozabad, Mallihabad, Agra, Lucknow and Varanasi will hugely benefit from this."

He also asked the Uttar Pradesh government to compete with Maharashtra in achieving the target of a one trillion dollar economy.

"I set this challenge before Uttar Pradesh to compete with Maharashtra and let us see who will become the first trillion dollar economy," he said.

Urging the states to get into the "spirit of competitive cooperative federalism" and to try and outsmart each other in growth and industrialization indices, he said Uttar Pradesh had advantages in terms of being a favourite investment destination as 60 per cent of the state's population was a working force.