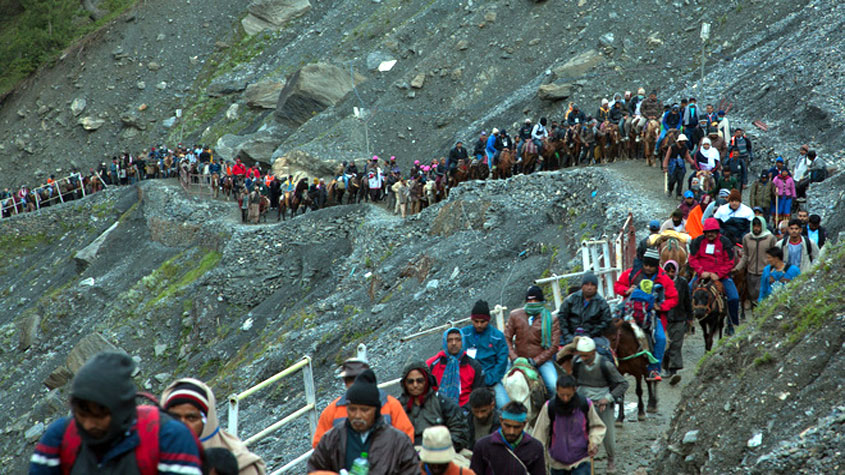 Over 67,000 pilgrims performed the Amarnath Yatra during the first five days while another batch of 5,124 yatris left Jammu on Saturday, officials said.

The yatris on Saturday left Bhagwati Nagar Yatri Niwas in two escorted convoys for the Kashmir Valley. The Yatra began on July 1.

The regional Met Office has forecast generally cloudy sky along the twin routes to the cave shrine on Saturday.

This year's 45-day long annual Hindu pilgrimage to the Amarnath Cave shrine situated 3,888 metres above the sea-level will end on August 15 coinciding with the Shravan Purnima festival.

The cave shrine houses an ice stalagmite structure that symbolises mythical powers of Lord Shiva, according to the devotees.

Yatris approach the cave shrine either from the traditional Pahalgam route or from the Baltal route both involving an uphill trek of 42 and 14 km respectively.

Helicopter services are available for the pilgrims at both the base camps.

Local Muslims have always lent a helping hand to ensure that their Hindu brethren are able to perform the Yatra with ease and convenience.

The cave shrine was discovered in 1850 by a local shepherd named Buta Malik.

Folklore says a Sufi saint gave the shepherd a bag full of charcoal that turned out to be gold.

Symbolically, the lore has proved true as the descendants of the shepherd received a portion of the offerings at the cave shrine for nearly 150 years till 2000.