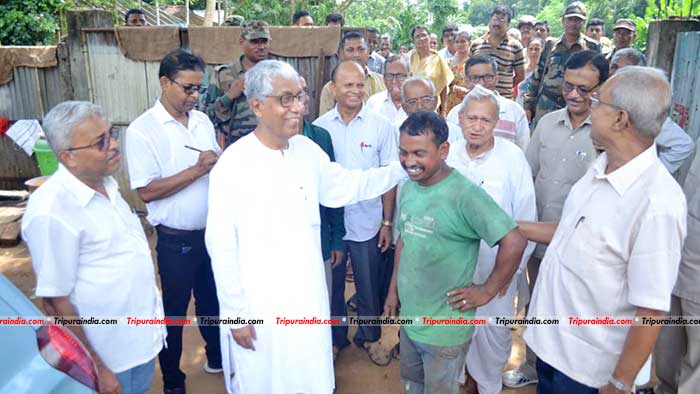 In what appears to be a significant development in terms of the present political scenario of the state, CPIM politburo member and leader of the opposition Manik Sarakar, from last few days, has been once again seen actively participating in party activities, something what according to political analysts is a late but an apparent bid of the party to reconnect with people.

The former Chief Minister has on today visited the residence of CPIM councilor Biswajit Saha, who was attacked by a group miscreants allegedly backed by the ruling party. Saha who was a known face of the party was abused and beaten up by the miscreants while he was on his way home. However, he was later rescued and admitted to the hospital. Sarkar today visited his house and interacted with the family members of Saha.

But, the most interesting part of his visit took place when Sarkar came out of Saha’s residence and tried to communicate with the locals about their experience in this regime. Suddenly, one Rahul Malakar turned up and expressed how he was abused and refrained from exercising his franchise. He told Sarkar that he was a BJP booth president before the assembly elections but in the just concluded Lok Sabha elections he given no responsibility from the part of the party. “Even I was resisted from giving my vote” the frustrated Rahul told Sarkar. The opposition leader embraced Rahul and said that he would be visiting his house once again shortly.

However, while speaking to the media persons, Sarkar said, in almost every part of the state, vehement attacks are being carried out on people. Such practices are unhealthy for the state. When he was asked about any attempt from the part CPIM to approach the government, he said, the Chief Minister and his administration knows everything and such practices should be stopped in no time. Notably, according to Rahul Karmakar, he was the booth president of Booth no. 42 of 13 Pratapgarh Mandal. Speaking to the media persons, he claimed, he was the first person to hold saffron flag in his locality but he was now being treated as no one in the local party unit.