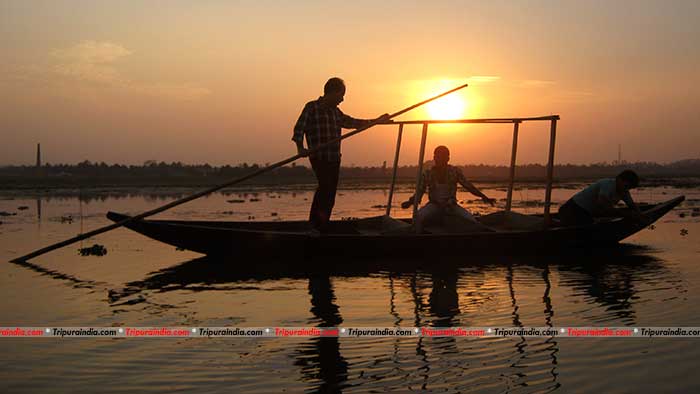 The fishermen community of the Rudrasagar area is struggling to bear their day to day expenditure as they are not being able to continue the traditional “Boro rice cultivation” followed by a Tripura High Court order. About, 2000 members of the co-operative society of the community are now being forced to explore other employment aspects due to the crisis looming large since past two years.

One Amalendu Das, a share cropper (Barga) farmer, had to sell his livestock as there is no scope of arranging fodder for the animals. He finally decided to sell his cow and arrange some money for his day to day expenses.

“I sold my cow last week. Since the entire farmland is under water, there is no scope of food for the animals. Finally, I sold my cow and used the money in family expenses” Das said. Das, who runs a family of five people, now works as a daily wager and struggling to sustain its both ends meet.

In it’s verdict delivered on November 07 last year, the Tripura High Court ruled that the water level of Rudrasagar lake has to be kept up to a certain level in order to maintain its beauty as per the recommendations of the Ramsar convention. Since then, the civil administration closed the sluice gates of the lake used to reduce the water level. And, altogether 1465.86 acres of agricultural land went under water.

The farmland was not only a productive field for the farmers’; it also worked as a financial support in the hard times for many. “Earlier, the farmers have options to mortgage their land and take some money in emergency. But since the entire productive land is now under water, there is also a visible strain about any immediate financial necessity, if appears, in the families” said Gopal Chandra Das of the same locality.

Massive resentment had been observed among the locals over the verdict as livelihood of not less than 20, 000 to 25,000 people appeared to have come at stake. However, massive protests were being staged since the beginning of the season of Boro cultivation—November to mid of April, but no positive nod yet had been reported.

Speaking to this website, Prameshwar Das, the incumbent secretary of the Rudrasagar displaced fishermen cooperative society limited, said, since this society come into being and Pattas have been given to the society members for cultivation and fishing in the Rudrasagar lake. In the dry season (November to April) agriculture becomes the major occupation for the people staying here. But, after the High Court ruling no one is allowed to do cultivation leading to huge financial losses.

“As an estimate of the agriculture department of the district, farmers incur a loss of Rs 9 Crore due to a permanent stop in the Boro rice cultivation. Now, from our part we are repeatedly urging the government to, at least, grant some relief for the farmers in the dry season only. In all likelihood, the government is keen to consider our demands but since the directions have been given by the High Court it may take some time” Das told this website.