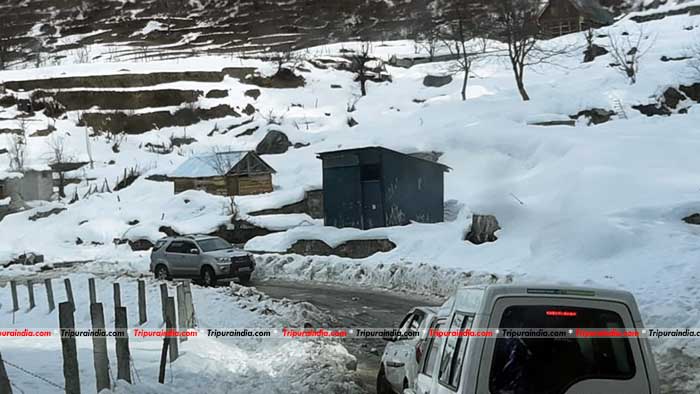 With the Himachal interiors still recovering from this week's heavy snowfall, the weatherman on Friday forecast more rain and snow in the state this weekend.

Chances of snow in the upper reaches of Shimla, Kullu, Kinnaur, Lahaul and Spiti and Chamba districts are high, the Met said.

Keylong in Lahaul and Spiti district was the coldest town in the state with a low of minus 17.6 degrees Celsius.

The police have advised commuters not to drive on Kufri and Mashobra roads as they have been slippery after the heavy snowfall.

"Several areas are likely to experience snow and rain on January 12 and 13," an official at the meteorological department here told IANS.

The minimum temperatures in Shimla and Manali were minus 1.3 degrees and minus 7.6 degrees Celsius, respectively.

Kalpa, some 250 km from Shimla, saw the night temperature at minus 6.4 degrees.

Snow could still be seen in several areas of Shimla like the Mall Road, the ridge, the US Club and Jakhu hills after this week's snowfall.

Areas near Shimla like Kufri and Narkanda and popular tourist resort of Manali are also covered under a thick blanket of snow.

Officials said the entire Kinnaur, Lahaul and Spiti and Pangi and Bharmour areas in Chamba are still cut off as roads were under a thick blanket of snow and efforts were being made to reopen them.

The State Disaster Management Authority has issued an avalanche warning in Kullu and Lahaul-Spiti districts.

The areas under threat are Kalath, Nehru Kund, Kulang, Palchan and Kothi in Kullu and Tandi, Keylong and Darcha in Lahaul-Spiti.