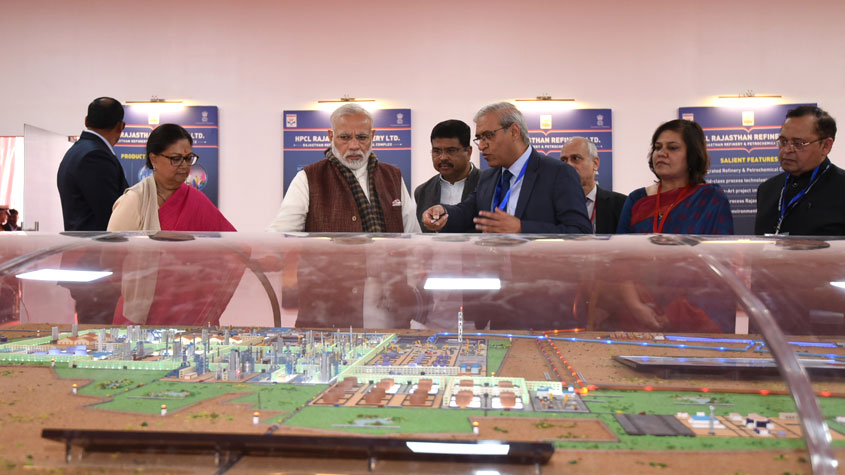 Prime Minister Narendra Modi on Tuesday laid the foundation stone of the Rs 43,129 crore big-ticket refinery project here and said it will change the economic landscape of Rajasthan.

"Rajasthan is taking the lead to become the energy power of the country," Modi said while addressing the event.

The refinery, a joint venture between Hindustan Petroleum Corporation Limited and Rajasthan government, will have the capacity to refine 90 lakh crude oil annually.

Due to be completed by 2022, the project is expected to bring Rs 34,000 crore to the state government coffers annually.

He appreciated the efforts of Oil Minister Dharmendra Pradhan and Rajasthan Chief Minister Vasundhara Raje who initiated the process to turn this project into reality.

"We cannot mislead people by installing stones. As in 2022 we complete 75 years of independence, we will ensure that our refinery starts functioning in the same year," Modi said.

He took a dig at the Congress, saying: "We don't want people to come and ask us that after installing the stone why you did not take action on implementing the same."

The foundation stone laying ceremony had been performed four years ago by then Congress president Sonia Gandhi.

Hitting out at the Congress on the issue of inaugurating the Rajasthan refinery twice, Vasundhara Raje said: "We don't believe in installing stones, but we believe in working hard to build a building. We work to turn our efforts into reality."

Accusing the Congress government of not doing anything after the stone-laying ceremony, she said: "There was no planning, no seriousness and no projection of implementing this scheme. We are doing this with a lot of planning."

The programme was also addressed by Pradhan who said the refinery will bring in lot of growth and development in the state.