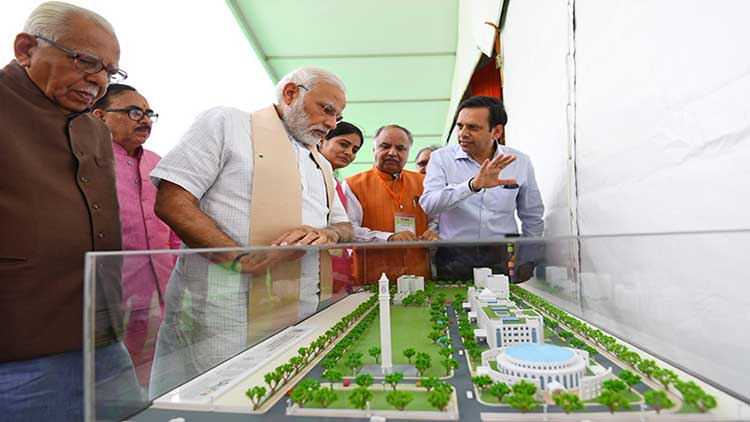 Prime Minister Narendra Modi on Sunday launched a number of projects including the much awaited Bansagar canal which is expected to provide a big boost to irrigation.

The Prime Minister arrived in Mirzapur on Sunday, on the second day of his visit to Uttar Pradesh.

The Bansagar canal project would help at least 1.70 lakh farmers of both Mirzapur and Allahabad with the irrigation sector receiving a huge boost. A joint venture of Uttar Pradesh, Madhya Pradesh and Bihar, the canal is 171 km long.

"The Bansagar project of about Rs 3,500 crore will not just provide irrigation in Mirzapur but also 1.5 lakh hectares of this whole area including Allahabad," Modi said while addressing a gathering here.

He also laid the foundation stone of the Mirzapur Medical College, inaugurated 100 Pradhan Mantri Jan Aushadi Kendras and a bridge over the Ganga river.

Modi said his government has taken several measures to provide affordable healthcare to the poor, including Jan Aushadhi Kendras.

"These Jan Aushadi Kendras are becoming a much-larger support of poor, lower-middle class. More than 700 medicines in these centres and over half a hundred surgeries are available at cheap prices," Modi said.

The Prime Minister said the Swachh Bharat Mission is also proving effective in controlling disease. He said the health insurance scheme -- Ayushman Bharat -- would be rolled out soon and also spoke of other social welfare schemes of the Central government.

The Prime Minister said the developmental work in the Purvanchal region has accelerated since the BJP-led NDA government came to power and the results can be seen by everyone today.

Targeting the Opposition, he said those who are shedding crocodile tears for farmers today should be asked why they did not take care of the country's irrigation projects which were left incomplete, during their tenure.

He said the Bansagar project had been first conceptualized about four decades ago, and the foundation stone was laid in 1978 but the project was unduly delayed.

Modi said after 2014 this project was made a part of the Pradhan Mantri Krishi Sinchai Yojana and all efforts were made to complete it.