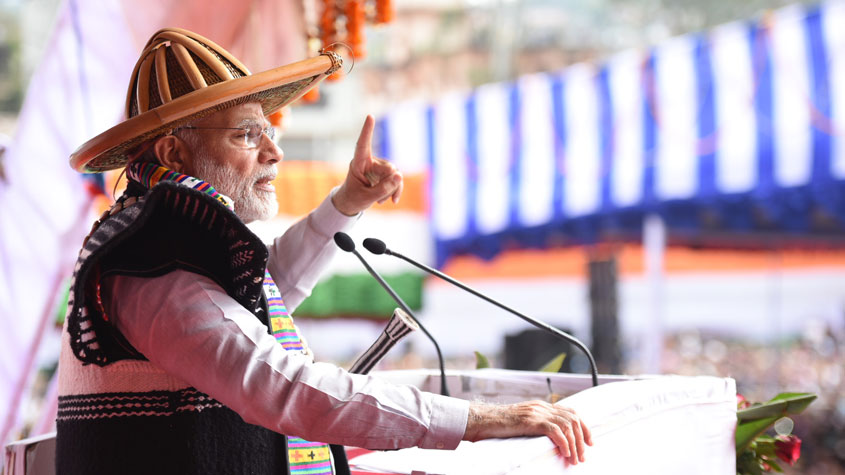 Prime Minister Narendra Modi, on a day-long visit to Arunachal Pradesh and poll-bound Tripura, took a dig at the Congress over what he said was leakage of funds meant for the poor during its rule.

"There is no dearth of funds in our country. But when a bucket carrying water has a hole, it will leak. That was the situation in our country earlier," Modi told a rally here.

Complimenting the state for hosting a vast majority of Hindi-speaking people, Modi said if there was a state in the northeast where Hindi was most widely spoken, it was "my Arunachal".

The Bharatiya Janata Party formed a government in the state amid a high-voltage political drama in January 2017 after Chief Minister Pema Khandu switched loyalties with 33 legislators.

"If you travel to Arunachal Pradesh for a day, you will hear more Jai Hind than you will hear after travelling the entire country for a week," said Modi.

He also inaugurated a convention centre in Itanagar and said the "vibrant centre will further the aspirations of Arunachal Pradesh".

"There will be conferences and cultural activities that will draw government officials and private companies. I am personally going to tell people - go to Arunachal Pradesh and hold your important meetings at the centre," he said, asking why such meetings should be held in Delhi alone.

"We must go to all states and that is why I came to Shillong for a northeastern council meeting and an important meeting related to agriculture was held in Sikkim."

Modi said a lot needed to be done in the health sector not only in the northeast but across the country. He emphasized the need to develop human resource, infrastructure and modern technology in the sector.

"The health sector needs special attention. Healthcare has to be of good quality and it must be affordable. We are working towards building medical colleges in all parts of the country. When one studies in a particular area, one becomes better acquainted with the local health challenges."

Modi will later travel to Tripura where he is expected to address two rallies ahead of the February 18 Assembly election. The BJP is looking to unseat the Left government in the state.