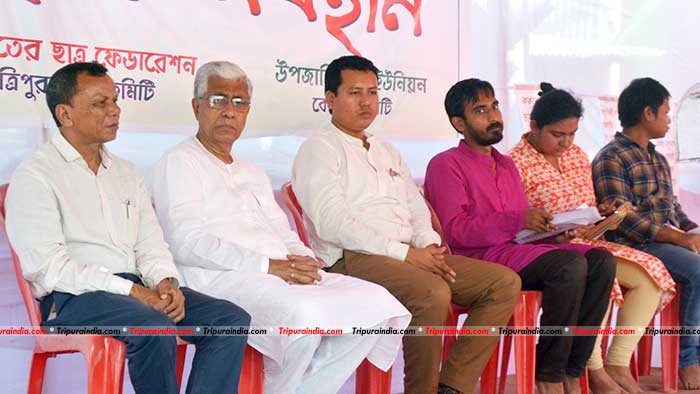 “The incumbent BJP-IPFT government is trying to suppress the movement of education that is initiated during the Left regime. Privatization of the education sector is nothing but a part of a well-orchestrated plan to puncture the people’s willingness towards education,” said the former Chief Minister.

He alleged that the before the 2018 assembly elections the Left government succeeded to lower the drop-out percentage of the students in between 1st standard to 10th standard through several welfare schemes introduced by the government and claimed that it would have touched zero if the Left government had ruled the stretch of past 20 to 22 months.

“The Left government through the introduction of Tiffin system for the students of elementary schools which later get broader spectrum and turned into mid-day meal scheme succeeded to reduce the drop-out percentage. Once the drop-out percentage of the students from class 1 to 10 stood at 87 percent which has been reduced to such a level that it could have been made zero by now if the Left government remained at the helm of the power,” Sarkar claimed.

He also alleged that ruling government is against the Left introduced schemes like eradicating illiteracy and infrastructural development in the field of education. “The overall infrastructure of education has been made accusable for every one by the then state government but unfortunately, the BJP-IPFT government is trying to privatize the institutions can be seen as an ostensive attempt against the system introduced by the Left” Sarkar added.

He also extended support to the JNU student movement and claimed the thinking people should stand along them. Notably, Sarkar was addressing a sit in demonstration organized by SFI-TSU against the government’s policies of privatization and capitalization of education.